Ramiro's PhD is focused around two of his main interests. The first is to explore the human neural correlates, cognitive mechanisms and motor representations involved in the perception of other peoples' actions, within a comparative perspective with those in animals. He is working with non-primate animals e.g. dogs, and with primates e.g. adult chimpanzees, to investigate how their cognitive and behavioural responses differ from those of humans when they are perceiving an embodiment-inducing stimulus, such as a yawn. In previous research work, Ramiro showed that dogs catch human yawns, that is dogs may yawn contagiously when observing a human yawning. This was the first study to investigate the phenomenon of contagious yawning across species (Joly-Mascheroni et al., 2008).

His second main interest developed after many years of working with blind children and adults. As part of his PhD research, Ramiro is investigating how humans perceive others' actions when they are severely visually impaired or blind. He is exploring how intersensory mechanisms in the blind may help disentangle the functional and neural relationships between vision and the other senses. Fundamentally, he aims to help parents and educators in the important and difficult task of aiding both severely visually impaired and blind individuals, how to interpret other peoples' facial expressions and how to portray those expressions appropriately themselves. 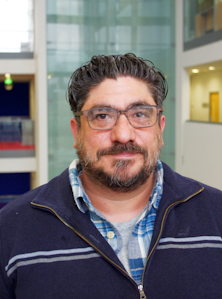