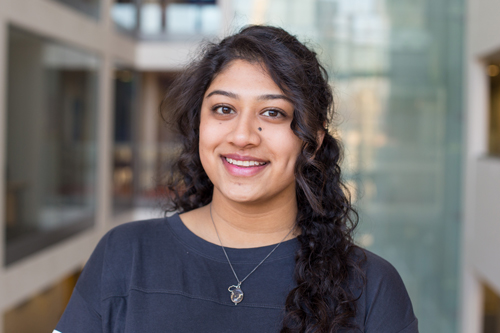 "My favourite thing about City and in particular my course, has to be the personal attention the lecturers provide."

I decided to leave Kenya based on my aspirations to achieve an excellent education – the course I intended studying was far more advanced in the UK, USA and Germany. London offers an immense choice of universities and future career opportunities, both of which would increase my employment prospects to an international scale. I felt studying and living in central London would provide me with interesting experiences and give me exposure to different types of people, activities and much more.

I was mainly attracted to City, University of London because of its prime location as well as their Biomedical Engineering course. I was interested in the physics and engineering aspects of the course as opposed to the biology aspect, and the modules met those requirements. Also, City was rather well positioned on the league tables for the course which was also quite reassuring.

The most challenging and exciting prospect of moving away was gaining independence. It was overwhelming being away from family and friends and adjusting to London’s culture – Kenya’s economic, working and learning culture is extremely different to that of London. One of the biggest differences between the two places has to be the weather. Kenya offers an equatorial climate and we do not experience harsh winters. In my first year, I was very fascinated by the snow and extreme changes in weather, even though it was difficult to adapt to.

My first impressions of London had already been formed when I visited my family during the holidays. I remember thinking that even though I live in a busy capital city back home, this one was vastly different. Everybody was in a rush and seemed to be running somewhere, everyone I met had a different accent, each more interesting than the previous. Overall, I thought it was a very fascinating and enjoyable city.

At first I was worried that I would be unable adapt to the erratic yet interesting London culture but the more time I spent exploring London, the easier it got. Attending events hosted by the University such as freshers’ fair, society Meet and Greet events, as well as several sports-based events like friendly dodgeball and taster sessions for sports (netball, badminton, basketball, hockey and rock climbing), provided a platform to meet new people and learn more about the city and its culture.

What kind of things are you involved in outside your course?

City offers a variety of clubs and societies, however, being a sports lover physical activity is very important to me and helps me take a break from the usual study schedule. I am an active participant of the City Hockey team and the Mountaineering club (CUMC), the captain of the City’s women’s table tennis team, and I also have a membership with City’s gym, CitySport. I am also on the communications committee for the Indian Society and have proudly become a Student Ambassador for the Widening Participation team.

Having London as my campus allows me to explore a lot; from spending time with my friends at the park or pub, to watching movies and taking a quick train ride to a different city – London is full of adventures.

What has been your student experience at City so far?

Ever since I joined City, they have been expanding the university and improving the facilities available to students which has been nice. There is always something interesting happening on campus; from events at the student union (City Bar), the giant chess board in the Tait building, to the table tennis games going on in-between lectures – City generally has a very lively environment.

What has been your favourite thing about studying at City?

My favourite thing about City and in particular my course has to be the personal attention the lecturers provide. My perception of university life was that it would involve a lot of independent study, however, I’ve found the lecturers have always been available to answer my questions and have been extremely helpful throughout the course.

For anyone considering moving to London for their studies, I would definitely recommend it as it is an experience I am very thankful for. This city caters to nearly everyone and not only in terms of studies and career opportunities, but also to a number of hobbies and interests.