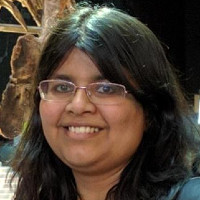 Dr. Subhasri Chatterjee is a Post Doctoral Research Assistant at City, University of London. She received her PhD degree in Biomedical Engineering from the School of Mathematics, Computer Science, and Engineering (SMCSE), City, University of London (2014-2018). Her PhD project was focussed on the Monte Carlo invesitgation of the light-tissue interactions in photoplethysmography, and was funded by the Erasmus Mundus (INTACT) scholarship programme. Prior to that, she worked in the Department of Physical Sciences at Indian the Institute of Science Education and Research - Kolkata as a research intern under the National Photonics Fellowship of India (2011-2013) where she was involved in a project on early diagnosis of cervical cancer using optical methods. Her background includes a BSc degree in Physics (2006-2009) followed by an MSc degree in Biomedical Instrumentation (2009-2011), both from the University of Calcutta, India.

Dr. Chatterjee's research interest lies in the investigation of the optical interactions in the biological medium by characterisation of the tissue optical parameters, and development of light-tissue interaction based algorithms and experimental technology for physiological measurement and early diagnosis.