“Art is a powerful tool to confront the complex issues we face today,” says author and artist Gan Golan. An uncontroversial statement, perhaps, when discussing great portraits, harrowing films, or triple decker novels. But not one generally associated with comics.

Yet Golan knows the powerful role that graphic novels can play in galvanising social movements better than most.

In 2010, he coauthored a short comic, The Adventures of Unemployed Man, that compared the efforts of the ordinary people challenging Wall Street’s financial elites with comic book heroes facing off against super villains.

Within weeks of its release, Unemployed Man himself – Golan in disguise – joined the Occupy Wall Street protesters in Zucotti Park in New York, where he stayed in solidarity for more than a month.

One decade on, and Golan has teamed up with a new group of writers and artists to produce another comic book aimed at galvanising social action on America’s streets. Joining Golan is the writer, activist, educator and Professor of Practice at Harvard Law School, Alan Jenkins and the experienced comic artist Will Rosado.

Behind them is a larger team still, of graphic artists, but also of journalists, scholars and activists who have offered information and advice from a broad sweep of perspectives.

What if the January 6 insurrection had succeeded?

The title of this collaboratively produced graphic novel is simple: 1/6. It refers to 6 January 2021, the day on which a mob of Donald Trump supporters laid siege to the US Capitol Building in Washington D.C., rallied on by the outgoing president.

One civilian was killed and more than 130 police officers were injured in the attack, while four took their own lives in the following months. Speaking to mark its first anniversary, President Joe Biden described the event as an “armed insurrection” that sought “to deny the will of the people” and “subvert the Constitution”.

Another year on, and the release of the first volume of 1/6 has been timed to coincide with the second anniversary of the attack on the Capitol.

The project, initially crowdfunded on Kickstarter where it raised nearly US$10,000 (£8,300), has been released in conjunction with Western States Centre, an organisation that brings together social movements and marginalised communities to advance “a 21st-century civil rights movement” across the US.

The premise of 1/6 begins with a question: what if the 6 January 2021 insurrection had been successful?

Drawing on a rich tradition of comics that depict counterfactual and dystopian futures, this graphic novel breathes horrifying visual life into a world in which there was no peaceful transition of power in 2021.

Instead, groups of armed thugs patrol the streets of Washington, suppressing civilian resistance with brutal violence under the banner of the Confederate flag.

Led by Rosado, the team of pencillers, colourers, and letterers portray an America at once familiar and strange. They blend everyday scenes – in streets, parks, newsrooms and diners – with panels designed to shock readers into action.

In one of the first volume’s most striking images, armed soldiers stand guard beneath a new statue in Washington D.C. that shows a group of insurrectionists led by the QAnon Shaman in the pose of the iconic Iwo Jima Marine Corps War Memorial.

As of 6 January 2022, only the first of three promised volumes of 1/6 has been released. It’s just under 40 pages, but it manages to convey a layered vision and complex plot in that limited space.

Perhaps the most interesting aspect of the authors’ approach is to centre the plot on a resistant movement that has sprung up against the new authoritarian government. 1/6 may present a dystopian future to lure in its readers, but its broader aim is to restore their agency and hope. 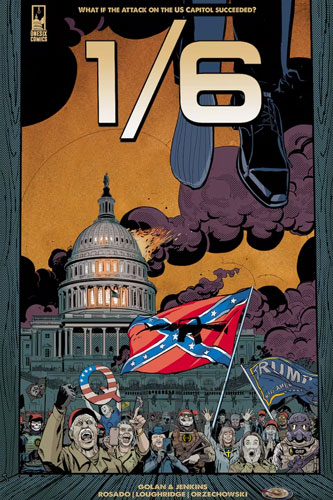 The cover of 1/6. Art by Will Rosado/Lee Loughridge, written by Alan Jenkins and Gan Golan

In this first issue, we follow a group of underground activists who have managed to smuggle the electoral college ballots that decide the presidential election to Washington. With this “last evidence of our democracy”, they plan to mount a civilian challenge to the militaristic takeover of their state.

When the trilogy is complete, we can expect a full length graphic novel. Promotional material for volume two suggests that the comic will return to the historical events that led up to the insurrection. As a form that represents time spatially on the page, comics are well placed to show how the present is always informed by the past, not to mention the ways in which that past is appropriated by those who aim to seize control of the future.

1/6 promises an exciting story line presented in compelling images. But it also aims to pivot its speculative fiction into the very real world of social movements, civil rights and democracy itself – whether in the Capitol or on the streets