Opposition to vaccination has existed for as long as vaccination itself. Ever since widespread smallpox vaccination began in the early 1800s, there have been cycles of questioning the safety and efficacy of particular vaccines.

The media has played a primary role in publicising these views, and social media has significantly increased the reach of the anti-vaccine movement in recent years. The internet has also given rise to a series of alternative health influencers, many of whom create anti-vaccination content on social media.

Our new research has found that these influencers often strategically target mothers on social media to build support for their cause. This is because when it comes to children’s health generally – and vaccinations specifically – mothers tend to be perceived as the primary care givers. 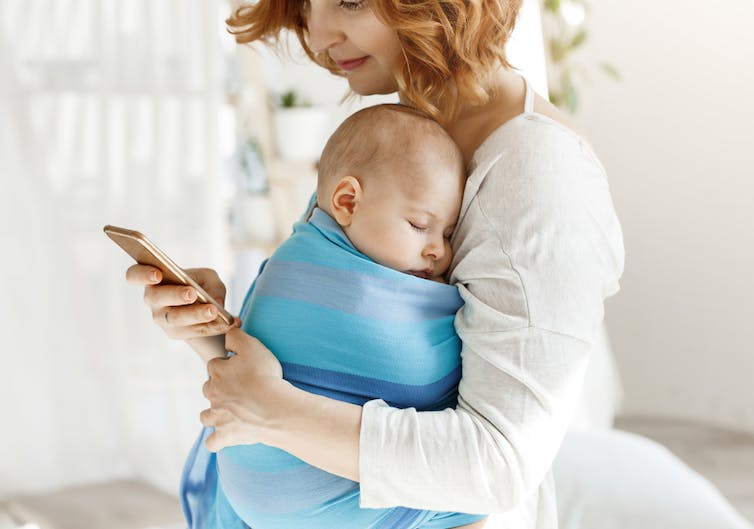 The social media accounts we analysed included the promotional account for 1986: The Act, an anti-vaccination film directed by Andrew Wakefield, the former medical practitioner who authored the discredited 1998 study that falsely linked the MMR vaccine and autism, as well as the accounts of several of the Disinformation Dozen, 12 influencers estimated to be responsible for 65% of anti-vaccine content shared online during the pandemic.

Among the influencers we analysed, a prominent theme they use to promote anti-vaccine messaging is that of the protective mother. Here, the mother’s primary role is defined in terms of ensuring their child’s safety and protecting them from harm. This theme is commonly communicated in terms of dietary and lifestyle choices – a “good” mother protecting her child from the state, corporate interests and unnatural chemicals in food and vaccines.

Common techniques used by these influencers to promote this theme include posting evocative imagery of mothers cradling their child accompanied by anti-vaccine messaging. Video updates and handwritten letters allegedly written by mothers apologising to their children for failing to protect them from harm also feature prominently on these accounts. Fathers are strikingly absent from these portrayals.

We also found that the influencers we examined co-opt hashtags on social media to associate the anti-vaccination movement with other popular causes. The account for 1986: The Act has used the Black Lives Matter hashtag to try to frame vaccination as a form of medical racism – what another anti-vaccine influencer, Robert F. Kennedy Jr, describes as “The New Apartheid”. However, this framing didn’t result in greater public engagement.

On the other hand, the account’s use of the Save the Children hashtag resulted in a significant increase in engagement with its posts, which doubled after the organisation began using the hashtag. By co-opting the hashtag, the account not only made its posts more discoverable, it aligned the charity and the anti-vaccination movement as common efforts to protect innocent children from harm.

The intuitive mother is another trope anti-vaccine influencers use to encourage vaccine refusal. It celebrates maternal intuition as a superior form of knowledge that is derived from raw emotion and lived experience, in contrast to the abstract, professionalised knowledge put forward by the medical establishment. Posts featuring this trope are used to persuade mothers that their own doubts and fears about vaccines are more valid than scientific and medical expertise.

The theme of maternal intuition is often communicated via personal anecdotes in the form of quotes, video updates and letters addressed to expectant mums. Personal stories of vaccine injury are used to sow and reinforce doubts regarding the safety of vaccines.

The influencers we studied use hashtags – such as #TrustTheMoms, #MotherKnowsBest and #Mothersintuition – to present their messaging about the innate wisdom of maternal intuition as part of a collective narrative about vaccine refusal.

By aligning themselves with the intuitive mother, these influencers – many of whom have medical credentials – are able to exploit their medical authority while criticising the medical establishment. Wakefield himself, for example, describes 1986: The Act as, “a story about one of the most powerful forces in the universe: maternal intuition”.

The doting mother is the final theme the influencers we examined use to encourage vaccine refusal. In posts of this kind mothers express unwavering devotion to their children. This variant is commonly associated with influencers who themselves are mothers and who advocate anti-vaccine sentiments.

One anti-vaccine influencer we analysed exemplified this theme by using personal posts that portrayed her at home with her daughter prior to their “mummy and daughter date”. These posts were accompanied by hashtags promoting the influencer’s paid-for disinformation documentary series about vaccines and cancer.

In such posts, being staunchly opposed to vaccines is depicted as part of being a doting mother. Yet for this influencer, these ostensibly personal posts were essentially marketing for her documentaries.

There’s a common assumption, perpetuated in the media, that mothers are largely to blame for the anti-vaccine movement. Our research interrogates this view, revealing how mothers are deliberately targeted by anti-vaccine influencers, who profit financially from sowing doubt by advertising products, services and alternative medical “cures” to the vaccine hesitant.

Rather than conceiving of mothers as solely responsible for their decision not to vaccinate their children, we should scrutinise those strategically attempting to influence and manipulate their decision making. Our findings reveal clear patterns in how mothers are targeted by anti-vaccine influencers online.

Knowing this, we should be less ready to judge mothers if they appear vaccine hesitant, and instead do more to prevent them from being targeted.