To celebrate the tenth anniversary of The Goldsmiths Prize, the panelists discussed their favourite books published before the founding of the prize and picked their own ‘fantasy’ winner. Both speakers are previous recipients of or finalists for the prize.

Gunaratne’s debut novel In Our Mad and Furious City was shortlisted for the Goldsmiths Prize 2018, and they have judged the prize previously. Former literary editor of The Times, author and critic Erica Wagner, chaired the event [pictured]. 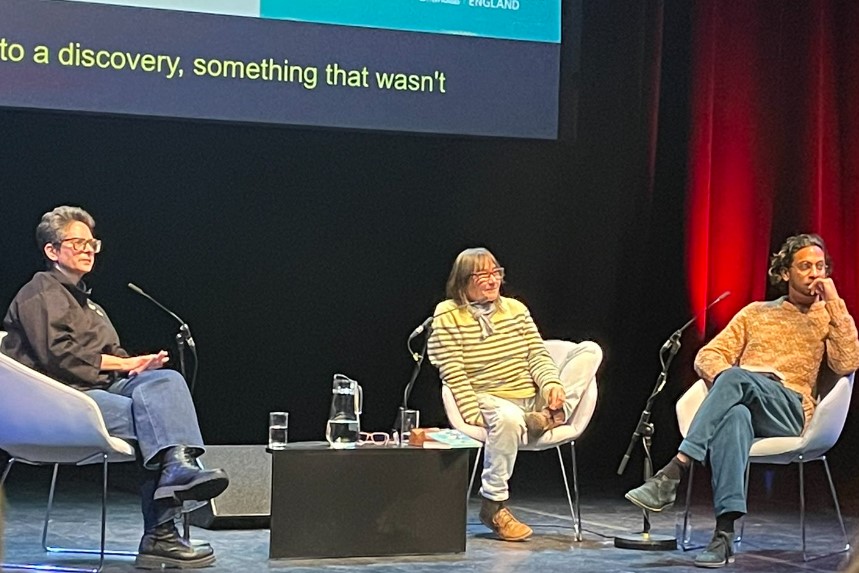 'Fiction at Its Most Novel' took place in the Queen Elizabeth Hall at the Southbank Centre.

Prior to their time in City's Department of Journalism, Guy first trained in film and television at Brunel University, London. They set up film production company Codoc with their girlfriend and fellow student, Heidi Lindvall (who studied MA Human Rights at City).

Through Codoc, they received a grant from Richard Branson as part of the Virgin Media Pioneers scheme. The couple documented suppression of the media in Sri Lanka in the wake of the civil war in their 2009 film The Truth That Wasn't There and explored forgiveness and justice in Northern Uganda through their 2013 film Forgive Me Mother.

This time covering human rights influenced Gunaratne’s approach to storytelling: “as a storyteller, I think I’ve learned how not to flinch when nearing the heart of any given story”.

In Our Mad and Furious City is set in and around a North-West London council estate, an area familiar to the Neasden native. The "stunning multi-voice debut novel" follows three narrators in the 48 hours following a killing of a British soldier, reminiscent of the 2013 murder of Lee Rigby.

The novel won the prestigious Dylan Thomas Prize in 2019, which awarded Guy £30,000 in a ceremony at Swansea University. The prize was awarded for the “best published literary work in the English language, written by an author aged 39 or under”. The prize celebrates the international world of fiction in all its forms including poetry, novels, short stories and drama.

Guy also won the £1,000 Jhalak Prize in 2019. The Jhalak Prize was established in response to the Writing the Future report from Spread the Word in 2015, which found that only 8 per cent of people working in British publishing self-identified as coming from a BAME background.

Additionally, In Our Mad and Furious City won the Author’s Club Best First Novel Award, was shortlisted for the Gordon Burn Prize 2018, and longlisted for both the Man Booker Prize 2018 and Orwell Prize for Political Fiction 2019. In 2020, the novel was the subject of a France24 broadcast feature.

In 2019, the Financial Times included Guy in its list of the ‘30 Most Exciting Young People on the Planet’.