Professor Michael Beckerman: The Grey Zone, Middles, and the Doctrine of One

Over the last decade I have tried to develop three strains of thought in relation to music. The Grey Zone, after Primo Levi, argues that we are, as never before, obligated to consider widely diverse fields of meaning as we approach musical works, including especially problematic and dismal ones.

The theory of middles advances the view that ‘middles’, construed broadly, are subject to special rules and behaviours, and often present things that are impossible to place on the ‘edges’.

The Doctrine of One argues that all reception of artworks is at the level of the individual, and that routinely, something that might be a throwaway to one person, could be the core of the experience for another.

My talk explores the process of trying to synthesize these three approaches into a single, more useful and powerful, theory of music and perception. 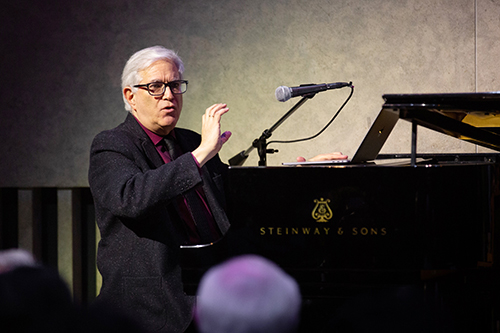 Michael Beckerman is Carroll and Milton Petrie Professor of Music at New York University. His diverse areas of research include Czech and Eastern European music; Musical Form and Meaning; Film Music; Music of the Roma; Music and War; Music in the Concentration Camps; Jewish Music, and Music and Disability.

He is author of New Worlds of Dvořák, Janáček as Theorist and has edited books on those composers and Bohuslav Martinů. He is the recipient of numerous honours, from the Janáček Medal of the Czech Ministry of Culture in 1988 to an Honorary Doctorate from Palacký University (Czech Republic) in 2014, and most recently the Harrison Medal from the Irish Musicological Society.