Please note, this event has now been cancelled and will be rearranged for the autumn.

Admission Price: Free to attend but places must be booked in advance 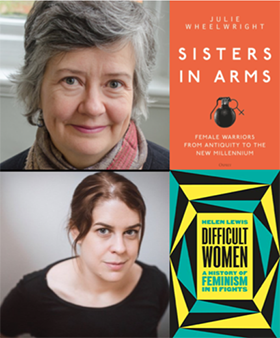 All are welcome to join City English Department in celebration of the publication of two new feminist histories of women. City Lecturer, author, and journalist, Julie Wheelwright, will be in conversation with the journalist and feminist campaigner, Helen Lewis, about their different approaches to telling true stories of difficult, combative, and warring women.  Both books (on which more detail is included below) will be on sale, and a selection of celebratory refreshments freely available.

Difficult Women: A History of Feminism in 11 Fights

Helen Lewis argues that feminism’s success is down to complicated, contradictory, imperfect women, who fought each other as well as fighting for equal rights. Too many of these pioneers have been whitewashed or forgotten in our modern search for feel-good, inspirational heroines. In this book, you’ll meet the working-class suffragettes who advocated bombings and arson; the princess who discovered why so many women were having bad sex; the pioneer of the refuge movement who became a men’s rights activist; the ‘striker in a sari’ who terrified Margaret Thatcher; the wronged Victorian wife who definitely wasn’t sleeping with the prime minister; and the lesbian politician who outraged the country. Taking the story up to the present with the twenty-first-century campaign for abortion services, Helen Lewis reveals the unvarnished – and unfinished – history of women’s rights.

Sisters in Arms: Female Warriors from Antiquity to the New Millennium

Telling an epic story from the Scythian women who begat the Amazon myth to the ‘passing’ women of the eighteenth century, to the re-emergence of women as proud members of the armed forces in the 20th and 21st centuries, Sisters in Arms demonstrates that women have always played a key role as warriors throughout the ages. Their experience of war has often been very different from that of men, whether serving as combatants or auxiliaries; and the popular images of the female warrior – whether as ‘mothers of the nation’, mascots, or symbols of romantic love and female devotion, or female defiance – have overshadowed the reality of their own experience. In this groundbreaking book, Julie uncovers the hidden stories of these remarkable women.