An audience of staff, students, policy workers, charity employees and interested members of the public gathered at City, University of London on 9th October 2019 for an Inaugural Lecture by one of the UK’s most distinguished social scientists, Professor Sylvia Walby OBE.

Professor Walby joined City this year to head up its new Violence and Society Centre. She is holder of the UNESCO Chair on Gender Research.

The event was chaired by Professor Chris Greer, Dean of the School of Arts and Social Sciences.

The audience were welcomed by City’s Professor Andrew Jones, Vice-President Research and Enterprise, who spoke warmly of Professor Walby’s appointment.

“I am delighted that Professor Walby has joined City to launch the Violence and Society Centre,” he said.

The Centre will soon appoint five new lecturers into the Centre across various disciplines including Sociology, Criminology, Health and Law.

“There is no one more able to lead this initiative than Sylvia Walby. She is known worldwide for her work and is a leading figure in sociology as a discipline.”

Professor Walby was then introduced by Dr Rachel Cohen, Head of the Department of Sociology at City, who noted that her appointment continues City’s long history of having outstanding sociologists among its academic staff.

“Sylvia’s theorising of patriarchy influenced a lot of us in this room,” said Dr Cohen. “Now her work on violence is doing similar. She produces diverse and wide-ranging work and I am excited to be part of Sylvia’s City epoch.”

Professor Walby’s talk – titled ‘Violence and Society: Towards Zero Violence’ – outlined her plans for the Violence and Society Centre, stressing that “the improvement of society is the goal” and illustrating how her research to date is lifting the lid on the true scale of violence in the UK.

For instance, the number of crimes that can be reported by a single respondent (such as a victim of domestic violence) that are included in the estimates used to be capped at five in the Crime Survey of England and Wales.

“The effect of removing the cap is that you see different patterns in violent crime,” said Professor Walby.

“If you take this cap off, there is 60% more violent crime than previously estimated; and this concentrated among victims who are women.” 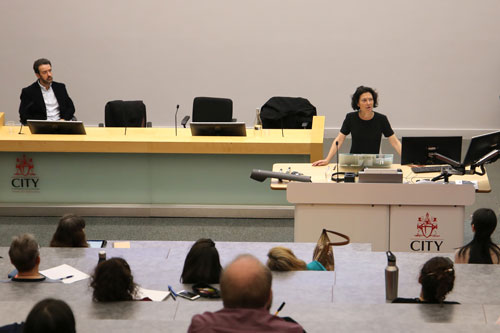 Mainstreaming gender into the theory and measurement of violent crime is crucial if we are to achieve Professor Walby’s aims.

She urged the importance of assembling a body of evidence driving the development of a theory of change which can have implications for policy, politics and a variety of interventions from criminal justice to civil justice, security, health and gender equality, at a local, national and international level. 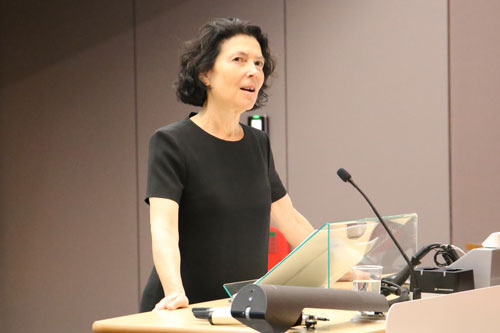 “I thank colleagues at City for the wonderful set of resources they’re giving me to take this forward,” she said. “But this is not the work of an individual. This may be my Inaugural Lecture, but this body of work was not possible without the active engagements of dozens – if not hundreds – of other scholars who engaged, criticised and developed that work, so that we can collectively take this forward.”

“I hope you will engage with me in the future and contribute to building the intellectual basis for the vision of an end to all violence."

Professor Walby was awarded an OBE for services to equality and diversity in 2008. Among her numerous contributions to professional social science, she is Chair of the Research Excellence Framework (REF) sub-panel for Sociology.