Professor Inderjeet Parmar, head of City’s Department of International Politics, has this week appeared on American business news channel CNBC to discuss the findings of the Mueller report.

Professor Parmar stressed that, while recent investigations, including the Mueller report, do have a “degree of plausibility” to them – hence why the investigations have been deep and broad – “I have never believed that [Trump] was any kind of agent colluding with the Russians”. 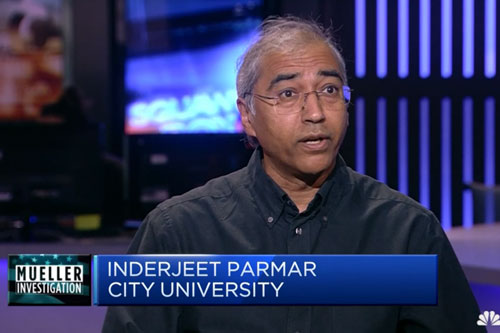 He said: “My view is that this was a distraction from the real causes of the defeat of the Democratic Party – and particularly Hilary Clinton in 2016.”

But he doesn’t believe Mueller’s report fully exonerates President Trump. “The report’s conclusions leave open a very ambiguous position, which is probably the best place for the Democratic Party to be. [It means] they can carry on.

“There is enough of a whiff of bad practice, enough people have been sent to prison on the basis of the findings of the Mueller report (and others as well). This gives them further reason to continue.”

Eyes turn to another investigation

Asked whether Mueller’s findings could lead to accusations that the Democrats are conducting a ‘witch hunt’, Professor Parmar said that attention should now turn to the House Committee on Oversight and Reform.

He said: “Just a few weeks ago, the Committee began investigating the desire among Michael Flynn and other appointees of the Trump administration to lift sanctions on Russia in regard to nuclear programme agreements, which were being made [in order] to set up and build nuclear plants throughout the Gulf states.”

Professor Parmar told CNBC that because there was going to be collaboration between Russian and American companies, the lifting of sanctions was a necessity. “That investigation is one worth keeping an eye on, because it suggests a very concrete reason for the US to be friendlier to Russia than it might otherwise have been.”

What next for Trump’s presidential rivals?

Professor Parmar was asked whether the findings of the Mueller report could damage the prospects of other presidential candidates, such as Elizabeth Warren, Bernie Sanders and Beto O’Rourke, who have been publicly damning of Donald Trump’s alleged ties with Russia.

He said: “They are going to suffer the consequences of their actions. They have – largely without evidence – been accusing Trump of being, essentially, a puppet of [President of Russia Vladimir] Putin.

“Trump was critical of the 'American Dream’, but a lot of people who were opponents of Trump were saying exactly the same thing. Yet they accuse him of sowing discord that aligned with the Putin agenda.

“Sanders, Warren and others have been on that bandwagon and they are going to have to pay the price. But that’s not to say that Trump is exonerated or not guilty of other things.”

Professor Parmar has been a regular commenter on the Special Counsel investigation (2017–19), also known as the Mueller report or Mueller probe, for the past two years, most notably for The Wire.

With the report summary now released, Professor Parmar believes the findings pose as many questions as answers.

“What are/were the political functions of the Mueller and other investigations into Trump's alleged collaboration with Russia?” he said.

“Does the Mueller report really fully exonerate Trump? Or, alternatively, is there a McCarthyite nature to the investigation of Trump?

“Was the Mueller investigation, for all the indictments it has produced in regard to bank, financial and tax violations, a major diversion from the real politics of Trump's victory in 2016 – the underlying legitimacy crisis of the US political establishment, of its unending wars since 1990, and pro-corporate policies resulting in increased economic inequality?”

Professor Parmar says it was clear to many observers (himself included) – whose voices were “drowned out in the media din” about Russian interference – that there was little if any hard evidence to back up the claims against Donald Trump.

“The dispute is really within the national security establishment over whether or not Trump can be relied upon to deal with growing domestic discontent and increased global challenges to US power,” he said.