The first Midwifery Units Networking Project meeting was recently hosted by the Centre for Maternal and Child Health Research (CMCHR) at the School of Health Sciences, City, University of London.

The research focus of the CMCHR is on the potential of midwifery-led units (MLUs) and services to address the complex, multi-faceted problems of widespread disrespect and abuse during birth, lack of evidence-based practice and women’s reluctance to engage with facility-based birth. These hamper efforts to reduce maternal mortality and are exacerbated by the gendered low status and lack of recognition of midwives.

The CMCHR invited existing Midwifery Units Networking Project partners from Malawi and Brazil and new ones from Sudan and India to participate in an intensive, full-time, week-long programme.  The aim was to establish a collaborative, interdisciplinary network of stakeholders with a shared interest in midwifery-led models of care.  Core elements were: 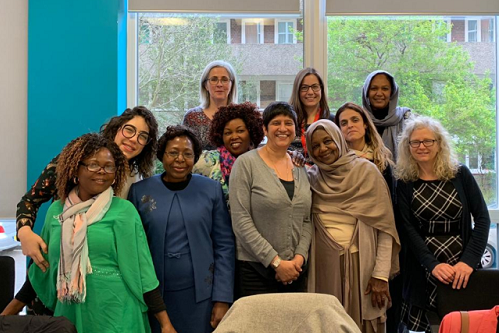 During the meeting, partners worked face-to-face, shared experiences and stories about birth and midwifery from their respective country contexts, and engaged in creative methodologies and group learning, which were vital elements of developing trust, ownership and the idea of themselves as a team.

Because of the week’s work they were able to generate a proposal for the next step of their research, winning a further £20,000 award in the City 2019 (GCRF) showcase event.

This award will fund the network to carry out feasibility and development work in the four partner countries, which will form the basis of a further funding proposal to carry out implementation and evaluation of midwifery-led care in each country.