Marking 20 years since the start of the Second Liberian Civil War, Gwendolyn Myers and her non-profit organisation, Messengers of Peace show how the youth have helped rebuild a nation.

Born in the height of the Liberian Civil War, Gwendolyn Myers, (MA International Politics and Human Rights), and her non-profit organisation Messengers of Peace-Liberia Inc (MOP), now helps young people who were forced to fight become volunteers for peace and security.

Around 250,000 people died in Liberia’s second civil conflict, a war which spanned four years and was made infamous for the recruitment of child soldiers.

The country was already economically and socially broken when peace was established in 2003, with an entire people left fearful of the youth for their role in the fighting.

Gwendolyn Myers, who grew up in Montserrado County answered the call for youth active involvement in peacebuilding when she started her non-profit organisation Messengers of Peace, at the age of 17.

“Liberia went through a combined 14 years of civil devastation where young people were being used to perpetrate violence. If they were being used to foment violence and conflict, then I thought why can’t they be used to create peace?” 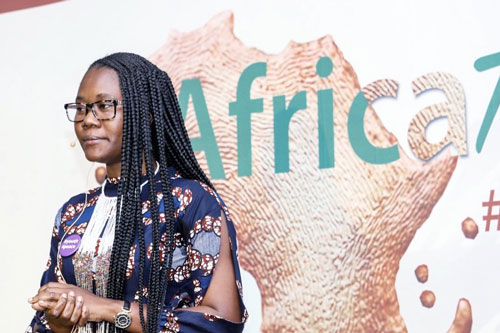 “My mother could not afford a blanket to wrap me in as a baby. I would beg my father to take me to the airport as I wanted to see what the inside of a plane looked like, but no one was allowed to enter.

“I remember crying and wanting to run or to fly away to anywhere, but I had to accept that it was not my time.”

At the age of 13 Gwendolyn volunteered on The Golden Kids News Programme on Search for Common Ground, Talking Drum Radio before taking up her first job at a catholic radio station Radio Veritas, helping Gwendolyn to give a voice to the youth

“I knew I was not alone, I was not the only one who was scared. I knew that there must be other young people across the world like me. This is where I got the drive to work in peace advocacy.

“I wanted to serve as an inspiration to people who felt that there was no hope. I wanted to show ordinary children and young people that they can make their own journeys outside of the conflict.” 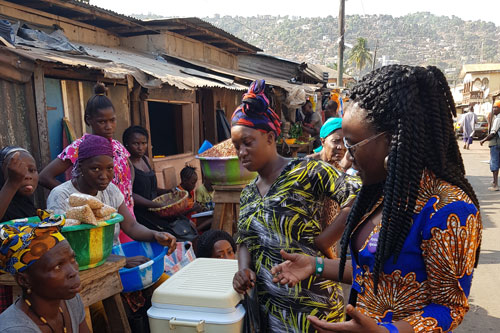 Messengers of Peace consists of over 1,000 volunteers with 80% female participation, creating a space for education and advancement of young women.

“Our young volunteers have their own initiatives that they run in schools, universities, communities and urban slums, through our peace clubs, community dialogue and mediation, cohort of young peace writers, annual summer camps and children deserve peace and security platform. We also mentor young people and help with their ideas on sustaining peace, public speaking, advocacy and improving literacy.

“A lot of our work is rebranding the image of young people who were former fighters and victims of the civil crisis.  They are often viewed as trouble makers, but they did not create war. They were used for violence so it is important that we help them to become messengers of peace.”

Gwendolyn became the first person to deliver an address on behalf of United Network of Young Peacebuilders (UNOY) to the United Nations Peacebuilding Commission (PBC), on young people being included in work around peace and security.

As a result of her speech, the United Nations adopted Resolution 2250, a move that focuses solely on giving youth a greater voice in decision making at national and local levels to counteract the threat of radicalisation where young people are used for extreme violence.

“Everything we do is focused on building peace and sustainable development. We use local initiatives to solve global problems like poverty after war.

“We simply cannot afford to let the next generation down. We must do everything we possibly can to make things better for the people coming after us. I will not rest until young people are meaningfully involved in peace and security issues”. 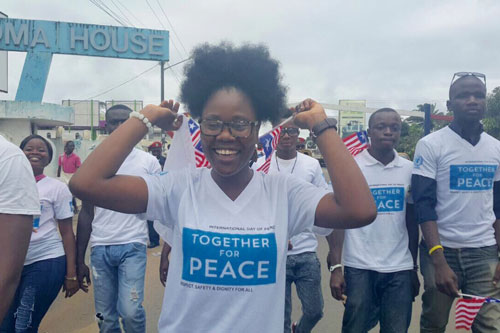 Recognised in the United Nation’s top six outstanding Young African Achievers, top 10 African Change Makers and more recently in the Top Eight Young Leaders of Time Magazine, Gwendolyn says this has been a journey since she was a child.

“I say this to all the young people I work with, you never know who is watching, so always do your best. You could be sitting with your small initiative just starting, but there could always be someone wanting to help or get involved.”

Serving as a voice for peace, Gwendolyn admits that there is nothing glamorous about her job.

“Working in peace is not sexy. Peace work was looked down upon by a lot of people in my life.

“My religious mentor told me that he would not support me financially if I decided to work in the peace, he wanted me to be a doctor. My family too wanted me to go into science, they said working in peace was not an attractive move for me.

“I broke down when I heard this as it felt like I was alone and because of this I did my undergraduate degree in biology and chemistry, but I never once felt any passion or burn for these subjects.

“Alongside my studies I was running my non-profit and upon my graduation I said enough was enough and cancelled my medical career.

“Young people have similar problems but in different forms, your teachers and parents may tell you who you should be and what you do, but you have to learn how to respectfully decline and go where you want to go.” 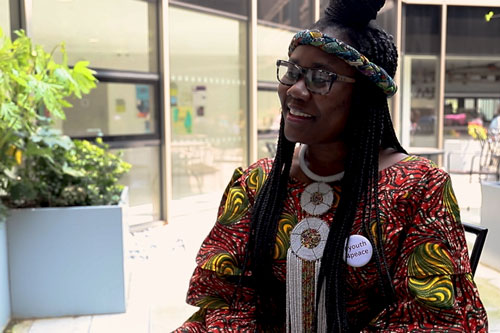 “I have 10 years of experience working in my non-profit, but I believe in continual learning and that is what brought me to City. It is not just about the grades, it is about the theory and different opinions which I can use to shape my work.

“I have spoken at events across the world including Peace Con 2018 in Washington DC and the first International Symposium on Youth involvement in Helsinki, where I was able to put the same questions that I ask in my lectures to the audience.

“When I make any decision, I look at the political implications, the social impacts, the cultural beliefs and human rights of the people affected and these are all things that I have learnt at City.

“Serving as a student ambassador means I am representing the university at all times. Whenever I meet young people I try to convince them to study – young people should always strive to improve themselves and education does exactly that.” 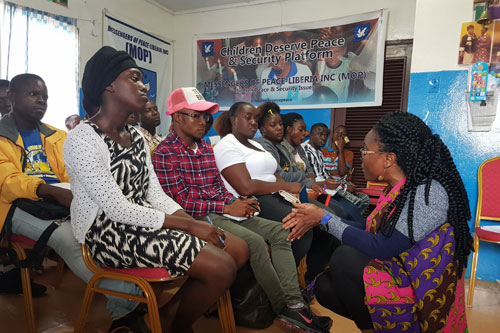 Despite Messengers of Peace being awarded Liberia’s inaugural National Peace Prize a month before she enrolled at City and the achievements recognised during her studies, Gwendolyn still says there is much to be done.

“I want to keep giving back, not just to Liberia or City but to the world. We face global challenges and therefore our work must continue to help young people and promote peace internationally.”

A country still healing from the wounds of war, Liberia’s 16-year-old rebuilding project is still currently ongoing. However, Gwendolyn’s Messengers of Peace shows how the young is helping to fix Africa’s oldest nation, offering hope where peace has conquered war.

See the Messengers of Peace website for more information about youth involvement in sustaining peace and security.