Dr Mark Lawrence has been awarded with the 2018 Lady Hilary Groves Prize.

A former PhD student from the Department of Music has been honoured for his work by Making Music, an organisation which represents 190,000 members of choirs and voluntary music groups across the UK. 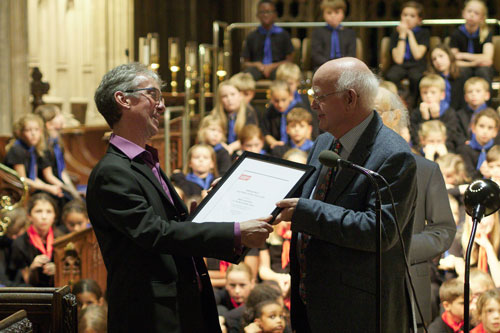 The Lady Hilary Groves Prize is an annual award which celebrates individuals who have made an outstanding commitment to promoting music in local communities.

Mark was presented his award at St Mary Redcliffe Church in Bristol after a performance of his opera, Home at Last, a sequel to his 2014 highly successful wartime musical Home by Christmas.

The opera set in the end of the Great War, featured 300 children, a massed adult choir, choristers, professional soloists and an ensemble from Bristol.

Mark said: “I'm thrilled to receive this award and hugely grateful to Making Music for acknowledging the vital importance of music in the community.

“With Home at Last I aimed to involve and challenge performers of all ages, from many backgrounds and with all levels of musical experience. The piece seemed to have a big impact on both audience and performers as it took us through the war, seen both through the eyes of young soldiers on the Front and those left at home.

“In planning and composing Home at Last, I drew on expertise gained during my time spent at City’s Music Department, particularly during the residency of the London Sinfonietta.

“During my PhD research into Estonian composer Veljo Tormis, I was fascinated by how his music was felt to be owned by the whole community – something we may aspire to in the UK.”

Mark’s work has also included founding Music Box Children's Opera Group in Bristol, writing and directing operas at the St George’s Bristol and Colston Hall and producing other works for theatre and dramas on BBC Radio.