A recent survey undertaken by the traffic operators of three major UK Bridges (the Humber, Forth and Severn Bridges) revealed that wind-related bridge closures cost an annual average of £5m.

Traffic disruptions occur owing to high winds and vehicle accidents on hundreds of other bridges around the country. The Queen Elizabeth II Bridge (The Dartford Crossing), used by an average of 130,000 vehicles a day, has been closed to traffic 14 times in the last five years causing acute economic loss. 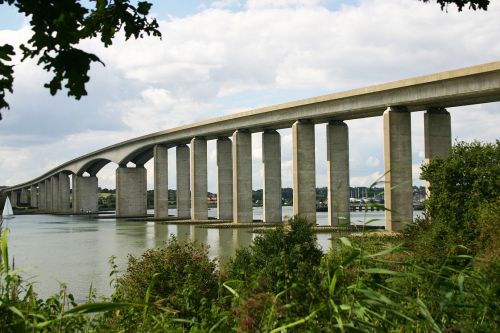 Focusing directly on this problem, City engineering academics, Dr Alfredo Camara (Department of Civil Engineering), and Dr Chetan Jagadeesh (Department of Mechanical Engineering & Aeronautics), are developing a new type of wind barrier to protect both the vehicles and the bridges in which the barriers are to be installed.

The barriers can modify their shapes instantaneously, optimising the shielding that they provide according to variable weather conditions and without the need for extensive strengthening or external power supply.

The project is already being supported by the main stakeholders in the sector, including, importantly, Highways England and the Department for Transport, and has won City's 2018 Enterprise Showcase Competition.

The successful development and commercialisation of the proposed self-adaptable barriers by these City engineering scholars, will represent a significant improvement in wind-proof technology for the protection of existing and new bridges.

Dr Camara has also embarked on a nine-month study of the aerodynamics of the Orwell Bridge and the wind speeds which permit vehicles to cross the structure safely.

The Bridge, first opened to traffic in 1982, carries traffic over the River Orwell south of Ipswich in Suffolk. It was designed to accommodate 70,000 vehicles a day and is a key point of the UK road network. However, in the past two years, the Bridge has been closed six times to protect vehicles from wind-driven accidents, causing significant traffic disruption and financial loss.

The study, which got under way on October 1st, was commissioned by Highways England.

Commenting on the innovative techniques which have gone into the research, Dr Camara said:

This project aims at developing a new numerical model in which the response of the bridge under wind load is combined with the response of the vehicles steered by the driver’s response. This cutting-edge model is being implemented in Python (advanced programming language) and will be applied to the study of the Orwell Bridge to determine the wind velocities beyond which accidents can occur for different vehicle types. This will help the bridge operators to design efficient and safe traffic protocols.

The project was recently mentioned in the East Anglian Daily Times and the Ipswich Star.