Do you hear Yanny or Laurel? People can’t decide about new sound 'illusion'

Audio clip features voice repeating one word – but which one do you hear?

Sensitivity to different frequencies could be behind a new audio illusion which has divided people on the internet, with people adamant that they either hear ‘Yanny’ or ‘Laurel’, but not both.

This lo-fi synthesised voice contains sounds consistent with several different phonemes, e.g. ‘ya’ and ‘lo’, each occupying slightly different frequency bands. Like a radio, our brains can selectively tune into them, once we know what to listen out for.

What one hears first depends on the how the sound is reproduced, e.g. on an iPhone speaker or headphones, and on individual’s own ‘ear print’ which might determine their sensitivity to different frequencies.

To illustrate the impact of different frequencies, Dr Freeman filtered the original sound to emphasise just the high frequencies or low frequencies, which can be seen as distinct features in the audio spectrograms below. 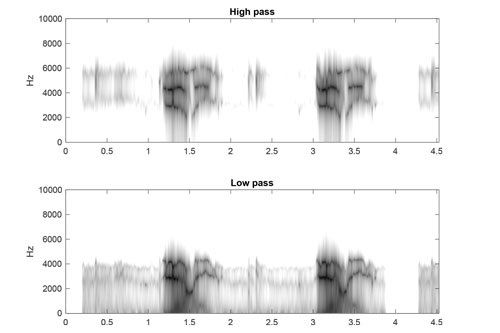 Dr Freeman said: “This illusion also reminds me of two related ones. First the classic McGurk illusion where the same ‘ba’ phoneme can be heard as ‘da’ when combined with incongruous lip-movements. Here the lip-movements may guide auditory analysis to extract different phonemic features that occupy different frequency bands.

“The second related illusion is visual, and exploits the fact that features of an image can occupy different spatial frequency bands, analogously to sounds. Aude Oliva at MIT first created hybrid images composed to two superimposed images, such as a blurred smiling face and an edge-enhanced frowning face, which are filtered for low and high spatial frequencies respectively. When you look close up, the edges of the frown will dominate, but the face will appear to smile if you stand back or squint your eyes so that the blurred image dominates.”