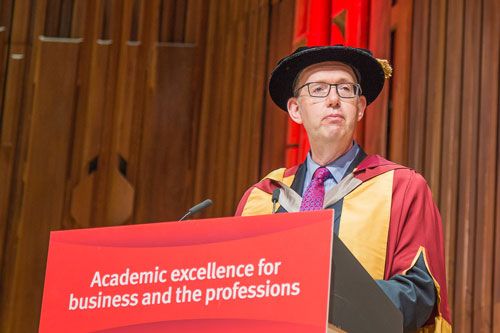 Government’s Chief Scientific Adviser for National Security and Chair in Software Systems Engineering at University College London, has received an honorary Doctor of Science degree from City, University of London.

He received his degree in recognition of his outstanding contribution to science, at a ceremony on Wednesday 31st January 2018.

Professor Anthony Finkelstein CBE, was presented with his degree by City's outgoing Chair of Council, Mr Rob Woodward, at the Barbican Centre in London.

The award was conferred during the ceremony for students graduating from City's School of Mathematics, Computer Science & Engineering.

Professor Finkelstein said he was "incredibly proud" to have received an honorary Doctorate of Science from City.

Speaking during the event, he urged graduands to look beyond the skills gained at University to serve others:

Take the choice to build, use the skills and knowledge you have acquired here to build something that will grow beyond you. Not a monument to yourself, but something shared and that will serve others. Build something worthy of the institution from which you are graduating.

Professor Finklestein has strong City links; he was a Professor and Head of Computer Science at City prior to his appointment as Professor and Dean at University College London.

His late father, Professor Ludwik Finkelstein, was a distinguished scholar and honorary graduate who made a seminal contribution to Engineering and its organisation at City, as the first Executive Dean of the School.

His brother Daniel, Lord Finkelstein, is also an honorary graduate of City.

Professor Finkelstein was educated at University College School; the University of Bradford, where he received his Bachelor of Engineering degree; the London School of Economics, where he was awarded an MSc; and the Royal College of Art, where he graduated with a PhD in 1985.

He was made a Commander of the Most Excellent Order of the British Empire (CBE).