Inspiring mentors and their student mentees have picked up awards in recognition of their achievements and commitment to City’s mentoring scheme. The 2017 City Professional Mentoring Awards aim to reward individuals who have taken part in the scheme, highlighting the impact mentoring relationships can have on student development and employability.

City’s Professional Mentoring Scheme matches students with individuals who work in the professions they are interested in working in. Many of the mentors work in highly competitive industries, from journalism and business to the arts.

Almost 60 per cent of students who are accepted on to the mentoring scheme come from backgrounds that are under-represented in higher education. Those who have gone through the programme report that it improved their confidence, courage and job-hunting skills.

During the event, three mentors and three mentees were given prizes, after being nominated by their mentoring partner.

Mentor of the Year (November)

Fatos was nominated by a mentee, who said he helped him to identify his skills and strengths and to work out what he wanted to do in the future. Fatos’ mentee added: “My mentor had a great influence on my development and gave me the confidence and courage to follow my dreams. He always made time for me whenever I needed to talk and this experience has left me inspired and motivated.”

Mentor of the Year (February)

Claudia was nominated by her mentee Taslima Begum for being “a great support system and friend”. Taslima said: “Claudia has helped change my way of thinking, and significantly helped me deal with my anxiety and confidence. I am not startled by difficulties that emerge on the way as I feel like I have more control now.”

Claudia said winning the award “meant a great deal”. She added: “It confirms my belief in the power of mentoring and the change that’s possible – on both sides- when mentees and mentors work as a team, with openness, honesty, clear goals and commitment to achieve.”

Anthony won the award for ‘first time mentor’ and was nominated by his mentee Nishan Pradhan for helping him to reach goals he “thought were “unachievable”. Nishan said: “Anthony provided insight into the various job roles within the financial sector and helped me understand the most suitable role to get into. Overall, I feel that my achievements were made possible with the continual support of my mentor throughout this year.”

Anthony described winning the award as a moment of “pride and validation”. He added: “My main focus was always my mentee, so to find out what he actually thought about the process made me very happy and was humbling. I'm glad I've managed to show him a little bit of what the city has to offer and that I made a new friend along the way.”

Mentee of the Year (November)

Rasheedat picked up the award for mentee of the year, and was described by their mentor as a “bright young lawyer” who was “committed, enthusiastic, cheerful and an absolute delight to work with.” Rasheedat’s mentor, Heli Italinna, a Legal Counsel at NBC Universal added: “Witnessing their hard work pay off in exams along with their growing confidence to achieve a career that matches their dreams has been fantastic.”

Mentee of the Year (February)

Mani was described by his mentor as the most dedicated person they had ever worked with. Mani’s mentor, Zaman Mahmud, Consultant at Jam Recruitment, added: “His interest in gaining knowledge and direction has been a breath of fresh air. Even during his revision period, my mentee showed a clear commitment to gaining as much out of the mentoring experience as possible. He now has a much clearer idea of the kinds of skills employers want to see, which will increase his chances of achieving a summer placement next year.” 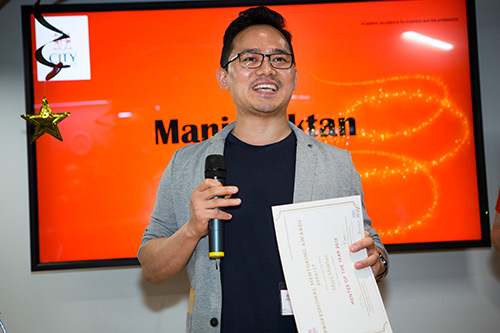 Chloe’s mentor, Lucy Gallagher, the People Development Co-ordinator at Guardian News, described the pair’s mentoring relationship as “amazing”. Lucy added: “Chloe always turned up to our sessions fully prepared, armed with questions, eager to learn and grateful for our time together. As a result, she gained two internships over the summer. It has been exciting and humbling to have had an impact on someone so much in so little time and I'm really proud of her achievements.” 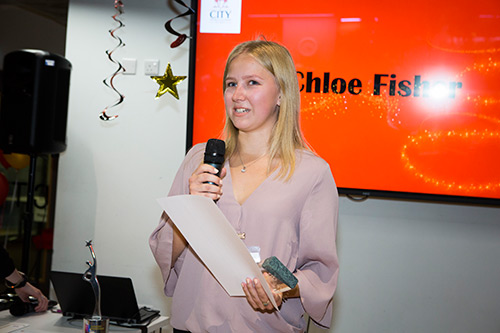 City’s Professional Mentoring Scheme was recognised earlier in the year at the Times Higher Education awards.