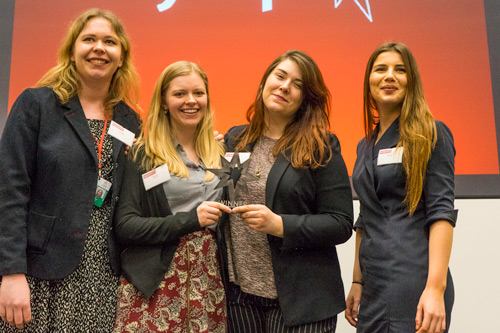 A team of journalism students is developing a prototype for an interactive newsgame after winning funding in a City entrepreneurship competition.

WordPlay will allow users to engage with audio content such as podcasts through screenless devices. And the four students say their product will be the first of its type in the world.

Gabriela said: “The exciting thing about new screenless tech is that it lets you interact with your voice – so instead of just listening to a podcast, it’s totally feasible that you could soon play a podcast, too. There’s a huge audience out there who love audio, and we think this is an incredibly exciting way to take that somewhere totally new.”

Cambria and Gabriela will lead the development of the prototype after they complete their degree courses in June, and they have already enrolled at a summer school run by the university’s incubation space, City Launch Lab.

All the games out there right now are visual... Why not make a game made up entirely of audio? Gabriela Jones

The team hope to have created their prototype by mid-autumn, when the plan to pitch the idea to news organisations, such as the BBC, New York Times and Buzzfeed, who they say have already invested in visual games.

Cambria explained the four students came up with the concept while working on a project on the Journalism Innovation module, run by Professor Jane Singer.

“The more research we did into market potential, the more we realised the gap we could fill,” said Cambria. “Winning City Spark was definitely unexpected, but we’re ecstatic that we did! Without this money, there’s no way we could have paid to develop this prototype. It will enable us to approach media companies with an example of our work, and not just an idea – which is so valuable.”

Before studying at City, Cambria was working for a small independent documentary company called Maya Vision International making history programmes for the BBC and PBS in America.

Gabriela was working as a multimedia producer, overseeing videos for The School of Life’s YouTube channel and working on a feature documentary for BBC Radio 1. Ellie was teaching and studying in China, and Georgina was studying an undergraduate course in languages.

The team says they developed the idea after discussing the popularity of digital games, the potential for incorporating news in them and the development of “smart speakers” by Amazon, Google and Apple.

“I’m a huge podcast fan and knew from the start I wanted to pursue something in audio,” said Gabriela. “It wasn’t until we started talking about the gamification of news that it struck me – all the games out there right now are visual.

“We’d already had a guest speaker from the Reuters Institute for the Study of Journalism talking about how screenless devices are on the cusp of taking off. So we realised – why not make a game made up entirely of audio?”