City at the Women on the Move Awards 2017

By Jennifer Schreyer and Gabriela Boccaccio 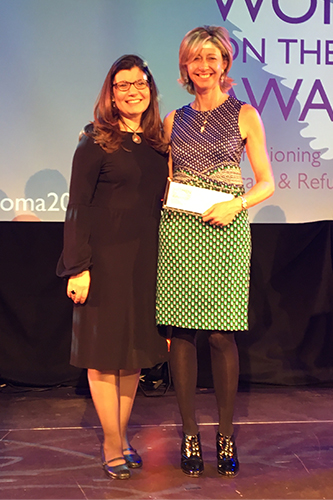 The achievements of migrant and refugee women were celebrated at the Women on the Move Awards 2017, which took place at the Southbank Centre in London on Friday 10th March.

Four awards were presented at the annual ceremony. Among them was the Sue Lloyd-Roberts Media Award, which celebrates the outstanding work of a journalist or producer whose reporting has promoted the protection needs of refugees, asylum-seeking or migrant women either in the UK or abroad.

Dr Zahera Harb (right), Senior Lecturer in International Journalism at City, University of London, chairs the panel that considers submissions for the award, which is named after the late pioneering journalist Sue Lloyd-Roberts.

“Media stories do matter. Refugees and migrants, especially women, are frequently reported as numbers, and victims at best, or threatening villains at worst,” said Dr Harb, who presented the award and spoke of the importance of humanising the coverage of refugees.

Christina Lamb, Chief Foreign Correspondent of The Sunday Times, won Sue Lloyd-Roberts Media Award for her series of articles on refugees, mainly women, and their struggle for safety and a better life. One of her stories portrayed 17-year-old Nujeen Mustafa, a Syrian refugee who fled her country and took on a dangerous journey across the sea and Europe in a wheelchair.

Christina believes "it's the women who are trying to keep everything together” when it comes to families and communities, and need to be talked about in the media. They are important in the refugee crisis which “is not going away and we should keep reporting it".

The presenter of the ceremony, BBC journalist Samira Ahmed, points out that “by giving awards, you start focusing on the positive”. For her, more men refugees are coming to Europe and “there are all kinds of issues about why the women aren’t coming and how they’re treated”. She believes that by covering the women’s situation “you have a much more honest discussion about refugees”.

For the sixth year, the ceremony championed a refugee or migrant woman and a young woman for their achievements in helping other refugees and migrants. Rozin Khalil Hanjool, a 19-year-old Yazidi refugee from Iraq, received the award of Young Woman of the Year after creating a petition for the UK government to support the Yazidi women survivors in Iraq.

The Woman of the Year award went to Eden Habtemichael, who escaped with her daughter from Eritrea in 2001. She has built a network to give support to asylum seekers and refugees in Oxfordshire and became an adamant campaigner against FGM.

Both women left their home countries and arrived in Britain without speaking a word of English to build a new life here. Now, Rozin is a law student and Eden’s daughter is a champion ice-skater.

Another trophy of the night, the Champion Award, went to Lord Alfred Dubs for his outstanding work and position championing the rights of children refugees.

Zrinka Bralo, CEO of Migrants Organise, started the Women on the Move Awards in 2012. The ceremony is supported and presented by Migrants Organise and United Nations High Commissioner for Refugees (UNHCR). It is held at the Southbank Centre as part of the Women of the World (WOW) festival that is organised yearly in celebration of International Women’s Day.

Jennifer Schreyer and Gabriela Boccaccio are students on the MA International Journalism course at City, University of London.