Many alumni of City’s journalism and creative writing courses go on to become published authors. One in six graduates of City’s Creative Writing (Novels) course are now published writers, with all those who comple it graduating with a polished novel ready to send to agents. The latest alumni to publish books are Clifford Thompson (Creative Writing Non-Fiction, 2012) and Laura Barnett (Newspaper Journalism, 2007).

City alumna Laura Barnett has released her second novel Greatest Hits. Billed by the Guardian as a 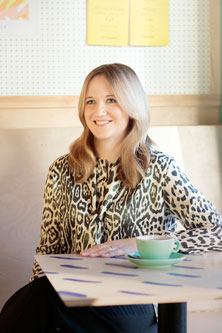 “novel for music lovers”, the book follows fictional musician Cass Wheeler as she tells her life-story through music. Laura collaborated with Mercury-nominated singer-songwriter Kathryn Williams on the novel, to create an album of songs to accompany the book.

The story takes Cass Wheeler on a journey into her past, as she picks sixteen tracks that define key moments in her life. It explores Cass’s disappointments and difficult memories, with themes of friendship, ambition, love and loss.

Laura’s accomplished debut novel, The Versions of Us, was a Sunday Times number one bestseller, a hit with critics and readers alike. It has been translated into 23 languages. Laura has also worked as a journalist and has written for the Guardian, The Observer, The Daily Telegraph and Time Out London. Laura said: "My second novel, GREATEST HITS, tells the life-story of a fictional English singer-songwriter, Cass Wheeler. Over the course of a single day, we follow her as she chooses 16 songs for a very personal Greatest Hits album. Each song she listens to sets off a chain of memory and association, drawing us through the arc of her life, from birth to adolescence, fame, marriage and motherhood.

"At the heart of my novel is my fascination with the evocative power of music, and with the pleasures and sacrifices of living a truly creative life. And each of the songs in the novel now exists in real life, on an album, Songs from the Novel Greatest Hits, by the amazing singer-songwriter Kathryn Williams. Writing the lyrics with her, and watching her put together the album, has been a life changing expedience for me creatively, involving courage, tears, laughter and a good few bottles of wine!

"I studied journalism at City rather than creative writing, but I learnt so much from my time there about the demands of making a career out of writing. My advice for anyone wanting to write is to be brave, write what you really care about, and don't let anyone tell you it can't be done."

The book has been published by Weidenfeld and Nicolson and is out now. The accompanying album, Songs from the Novel Greatest Hits released by One Little Indian Records is available to buy or stream now.

Falling Through Fire by Clifford Thompson

Former firefighter Clifford Thompson has found a publisher for his debut book,

Falling Through Fire. The memoir, tells Clifford’s story of his time as a firefighter and then as a journalist working on major disasters including the 1993 World Trade Centre bombing and the Paddington train crash. The book’s central theme revolves around an incident that stayed with him for life: a three year-old boy who died in his arms following a house fire the week before Christmas in 1991. Twenty years later, Clifford decides to search for the boy’s mother.

Clifford graduated from City’s Master's in creative writing (non-fiction) with a distinction. In 2014 he was awarded a short scholarship by the Norman Mailer Center in the US where he worked with Mailer’s friend and collaborator Laurence Schiller. He is also a staff journalist working for the BBC on regional, national and international news.

Clifford said the course he took at City was crucial to him getting a book deal. He said:

It’s been a massive help to have worked on the Masters to get the book to such a professional standard throughout the course. It meant that it didn’t need much of a structural edit, a point mentioned by my editor Jo Sollis. This really speaks volumes about the input my tutors had and the course itself which I think was fantastic.

Falling Through Fire is set to be published in September 2017 by Mirror Books.

For more information and for details on creative writing courses at City, click here.