On 24th May, the School of Mathematics, Computer Science and Engineering (MCSE) staged an evening of talks during the annual three-day festival.
First published Thursday, 26th May, 2016 • by John Stevenson (Senior Communications Officer) 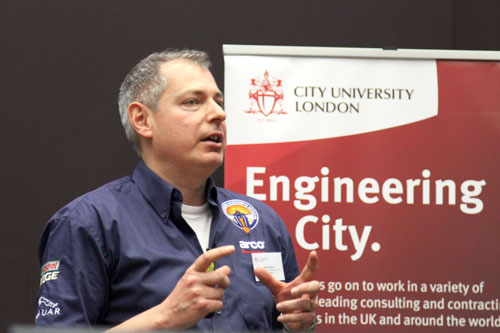 The Clerkenwell Design Week, held this year from 24th to 26th May, celebrates the innovative design work coming out of the historic Clerkenwell design quarter.

Facilitated by the School of Mathematics, Computer Science & Engineering (MCSE), the Fringe Event featured presentations from a four-person panel who each employ high performance computing in the service of design. 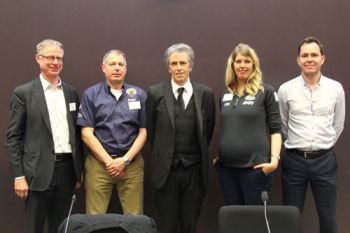 Duncan Bradley, Head of High Performance Design at McLaren Applied Technologies, provided insights into the production of the 2015 Tarmac bicycle, which uses ‘Rider-First Engineered’ technology. Duncan explained that by taking the rider and not just the bike into consideration, McLaren managed to arrive at a design solution which performed aerodynamically better than its competitors.

Elisabeth McLean, a Computational Fluid Dynamics Engineer for the Land Rover BAR boat (Sir Ben Ainslie’s America’s Cup Team 2017), gave fascinating insights into the use of fluid dynamics and meshing in its design. It is hoped that the marriage of engineering and computation skills will help bring the America’s Cup – the oldest international trophy in world sport – to Britain for the very first time.

Mark Chapman, the Chief Engineer of the Bloodhound (land speed record car) SSC, explained how computational fluid dynamics (CFD) was used in producing a unique vehicle combining the features of a car and an aircraft, powered by a Eurofighter-Typhoon jet engine and a rocket, and weighing 7.5 tonnes to travel along the surface of the Hakskeen Pan desert in the Northern Cape, South Africa in 2017. 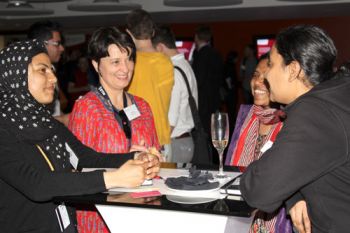 Joseph Burns, Managing Principal at international engineering design consultancy, Thornton Tomasetti also spoke about the use of high speed computation for tall building construction and his company’s expert witness investigation into the collapse of the Tropicano Casino and Resort multi-storey parking garage in 2003. They used a drone to assist in collecting aerial photos for advanced computer modelling and materials testing to determine the cause of the collapse.

City’s close connection to Clerkenwell stretches back to 1894 in the University’s previous incarnation as the Northampton Institute, when it offered classes in horology, metal trades, and artistic crafts for industry. 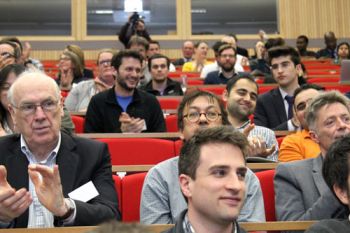 Hakskeen Pan is a mud and salt pan in the Kalahari Desert. It is located in the Mier region in the Northern Cape Province at 801 metres (2,628 ft) above sea level. The pan covers an area of approximately 140 km2.