The 2015 Onassis Prizes, awarded to the world’s foremost academics in the fields of finance, international trade and shipping, were presented at the Guildhall in the City of London on Monday 14th September 2015.

The prestigious prizes, each worth $200,000, are sponsored by the Alexander S. Onassis Public Benefit Foundation and awarded every three years by Cass Business School, part of City University London, jointly with the Onassis Foundation, in association with the City of London.

Each of the Prize recipients delivered a lecture on their area of expertise at Cass Business School.  This was followed by a banquet at the Guildhall when the Prizes were presented which was attended by senior representatives of Finance, Trade and Shipping Communities of the City of London and other capitals.

Speaking at the banquet, The Senior Alderman Below the Chair, Lord Mountevans, Jeffrey Evans, said that for many, this is the Nobel Prize for Shipping, International Trade and Finance.

“London’s international position was based on shipping and trade with finance, as we know it, following on. How appropriate that these iconic prizes are awarded here, in the world’s leading financial and shipping centre.”

He continued: “In a time of great change, shipping is a constant, with over 80% of international trade transported by sea and meantime, trade is predicted to double in the next 20 years.  This is a very important business indeed – a crucial business”. 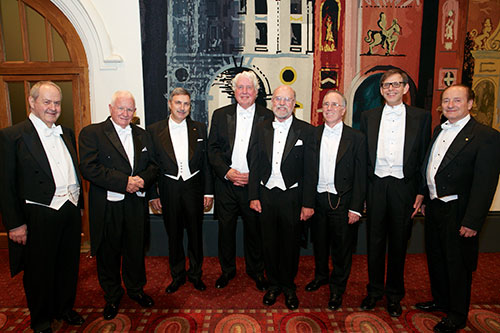 Professor Stewart Myers, the Robert C. Merton (1970) Professor of Financial Economics from the Massachusetts Institute of Technology was recognised for his contributions to corporate finance. Accepting the Prize, he commented:

“This Prize, in a way, is a recognition of how exciting and important corporate finance is as a part of the broader field of financial economics.  Corporate finance combines serious theory, extensive opportunities to do empirical work but also a responsibility to figure out how to value things better in a corporate context and how to advise corporate financial managers to make better decisions”.

Professor Richard Roll, the Linde Professor of Finance at the California Institute of Technology, was recognised for his contribution to capital markets.  He commented:

“This is an incredible honour and I really appreciate the dignitaries that are here and the Onassis Foundation. Of course, I don’t have to say anything about financial economics, it’s the greatest career that somebody could have had and it still is the most important thing in the world, really”.

Professor Gene M. Grossman of Princeton University has received the 2015 Onassis Prize for International Trade. Professor Grossman is recognised for his outstanding contributions to strategic trade policy, environmental economics and the economics of offshoring.  During his acceptance, he said:

“This is a humbling and wondrous occasion, I still marvel that after 35 years someone is still willing to pay me to indulge my intellectual curiosity, to think about things that interest me and that I think are important to society.  I am also gratified that this Award focuses on International Trade, which has fascinated me ever since I began collecting coins as a child and which I think is incredibly important for society but so poorly understood and always at risk of being a political scapegoat”.

Professor Trevor Heaver spent many years as the Director of the Centre for Transportation Studies at the Sauder School of Business, University of British Columbia and is best known for his work on transport economics particularly international shipping and logistics. During his acceptance speech, he commented:

“I’m here because of good fortune I have enjoyed from my school days to today.  I went on to be a part of supportive academic and business communities in Vancouver - the award really belongs to those communities of which I have been a member.  I’m sure it will help advance maritime studies in Vancouver and more widely”.

“I can’t tell you how pleased and surprised I am to find myself standing here this evening…my grateful thanks to Clarkson’s for teaching me what shipping economics is really all about - this is a company which was set up in 1852 and has never made a loss.  Brokers play an enormous part in making the shipping business work and bring all of the different parts of the business together”.

Dr Anthony Papadimitriou, President of the Onassis Public Benefit Foundation and Chairman of the panel of prize judges, commented:

“Onassis became famous in his lifetime, and after, for his mastery of the science and art of Shipping, Trade and Finance. The Onassis Foundation is proud to associate once more the name of its Founder with the Corporation of the City of London and the Costas Grammenos Center for Shipping Trade and Finance (City University London) which respectively are world centers of the practice and academic study of these three entrepreneurship areas. This third edition of the Prizes is on an unparalleled level”.

Commenting on the winners, Professor Costas Grammenos, who is the founder of Cass Business School’s International Centre for Shipping, Trade and Finance and was instrumental in launching the prizes, said:

“The Onassis Prizes honour lifetime academic achievement in areas which have not previously had a platform for global recognition. I warmly congratulate the winners whose distinguished achievements have profoundly influenced their disciplines and continue to have an impact on academic thinking and business conduct worldwide”.

The prize recipients were announced by the Lord Mayor of the City of London, Alderman Alan Yarrow, at a ceremony in Mansion House in March 2015.

The Onassis Public Benefit Foundation is named in honour of Alexander Onassis, son of the Greek shipping magnate Aristotle Onassis, who died in 1975.