Considered one of the most promising documentary photographers of her generation, Greek photojournalist Anna Pantelia came to City last year to study a Masters and enhance her career prospects. Chris Lines sat down with Anna to hear about her work in photography to date and the path that led her to City.

This article is taken from the 2015 Alumni magazine, City Magazine.

In February this year, the influential photographic agency Magnum Photos announced a ‘30 Under 30’ list identifying emerging photographers aged 18 to 30, with the aim of recognising and providing a platform for burgeoning photographic talent. Among them was City MA student Anna Pantelia.

It was the most important thing that’s ever happened to me,” she says. “I could never have imagined this happening – it really means a lot.

Magnum, founded in 1947 by some of the world’s leading photographers as an ‘international photographic cooperative’ and owned by its photographer-members, is seen as a standard bearer in documentary photography. For 23-year-old Anna, a ringing endorsement from those she most admires means everything to her. It’s also a clear indicator of her potential and the latest step in her fledgling career. But even before Magnum drew attention to her talent, Anna had already had some remarkable experiences behind the lens.

In her home country of Greece, there is a tradition at the end of high school for students to embark on a five-day trip. Anna had other ideas. “I said to my dad, ‘I don’t want you to pay for me to go on this trip. Can you give me this money to put towards a new camera instead?’. Up to that point I had been taking photographs with a pocket camera.” Her father relented and bought his daughter a Canon SLR.

“It was a very good camera to have when I was only 16 or 17,” she says. “Normally someone of such a young age would never have such high-quality equipment. I remember my mother saying to my father, ‘If she asks for a Ferrari are you going to buy her one of those, too?’”

Very soon she was producing art photography of a sufficient standard that it was published at a small exhibition in Athens for new artists. Her interest suitably stimulated, she opted to study for a BA in Photography and Audiovisual Arts at the Technological Educational Institute of Athens.

“My family thought I should do something else,” she says. “My marks were way higher than the entry requirements and they worried I might be wasting the good grades I had achieved.” Architecture and physics were suggested as alternatives. These conversations led to her father arranging for her to meet a customer of his, who worked in the University of Athens’ Faculty of Physics. While the physicist failed to change Anna’s mind, it nonetheless proved to be a fortuitous encounter. “We later spoke again and he asked if I would be interested in coming to work as a photographer at CERN, the European Organization for Nuclear Research.”

Anna expressed her interest but assumed her father’s customer was just making polite conversation. She sent him her cv and subsequently received an application form that she completed and returned. A letter later arrived on 2nd April confirming she had a place at CERN, conditional on passing her final examinations. “I wondered if it was an April Fools’ joke that had been delayed in the post,” she recalls.

By chance, while Anna was busy revising in the last few days before her finals, news broke that the Higgs- Boson particle (often referred to as the ‘God particle’ and long considered the missing piece in the jigsaw for physicists trying to understand how the universe works) had been discovered at CERN’s £6.2 billion Large Hadron Collider (LHC). It was one of the most significant discoveries in the history of particle physics, not to mention the biggest story ever to come out of CERN. “The news was everywhere, all the professors were giving interviews on television,” she says, recalling the intense distraction of wall-to-wall coverage for an organisation she was tantalisingly close to working for.

Thankfully, she passed and was initially taken on for a two-month paid internship as a photographer. She proved a popular and hard-working addition to the team and was subsequently hired for a further year as Official Photographer. With CERN enjoying a well-earned shutdown after its momentous discovery, Anna had the freedom to visit (and photograph) absolutely everything, including all 27km of the Large Hadron Collider. Nothing was off limits and she was able to put together a remarkable body of work. 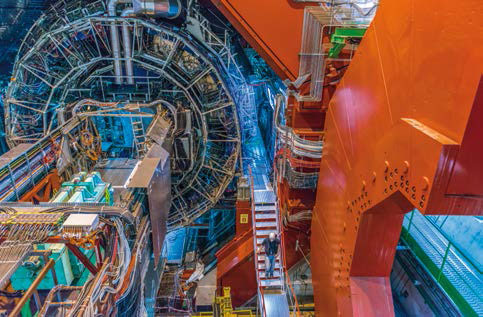 She would also be posted to cover events such as open days, concerts and, most memorably, the visits of VIPs to CERN. Professor Stephen Hawking and actor Morgan Freeman are two that Anna picks out, with Freeman even taking time to quiz her on her background and her photography. “He was very friendly, not like a VIP at all.”
A friend working at a Greek national agency asked if she could interview Anna about her experiences. Anna agreed to help as a favour and neither of them thought any more of it. The day the interview was published, Anna was on holiday in Israel when she suddenly started getting telephone calls from Greek national television and radio stations. They all wanted to talk to the young Greek woman working at CERN.

“I got so much attention and all because of a single article,” she says. “This helped me to understand how the media works. It’s all about whether you are lucky, whether somebody will discover you or write something complimentary about you.” The realisation that she needed to become more media-savvy would soon lead her to City.

Refugees and racial tension in Greece

Anna’s experiences at CERN gave the media a feel-good angle they could work with. The same however cannot be said of the photojournalism she had produced prior to CERN. Having started her degree at the same time as the global financial crisis was enveloping her country, she saw her peers becoming increasingly xenophobic, even racist, as the jobs market dried up and desperation started to creep in. She paints a bleak picture of a country in turmoil.

“Greece has a history of its people migrating to other countries, such as Australia and Germany, so we were always sympathetic to other people coming here,” she says. “Greeks didn’t have any racism in their blood, but as the crisis boomed from 2008 to 2012, things changed quickly. Some 52 per cent of young people in Greece are unemployed nowadays and 26 per cent of the total population. This is why racism started: people needed somebody to blame for their problems and, of course, people don’t blame themselves.”

In 2012, during the Greek national elections, the far-right political party Golden Dawn gained unprecedented support, enough for the party to enter the Hellenic Parliament for the first time with 21 seats. Plainly this was not an easy time to be an immigrant in Greece.

“The situation continued to get worse, partly because Greece couldn’t keep its borders secure,” says Anna. “Most immigrants have no legal documents, so it’s difficult for the authorities to even ascertain where they come from if they did want to send them back. All these problems were increasing. There is poverty, there is unemployment, so inevitably there is more crime.”

Anna became acutely aware of the immigrants’ plight. Rejected by the society around them, they often occupied abandoned buildings, living in squalor and unable to find work or the better life they craved. Yet many doubtless viewed their situation as preferable to the one they had fled in their own country. Anna’s skilful eye and compassion allowed her to capture striking documentary images of the immigrants’ predicament.
“They were mainly Syrian and Palestinian immigrants of a similar age to me, 20 to 25. These people came from their countries more or less on foot.” Many of those she met had been students in their homeland but were forced to leave. They got around border controls by arriving by boat up a river. They then walked all the way from northern Greece to Athens.

Anna got to know some of the immigrants quite well. She met a group of Syrians at a kiosk in Athens who, despite their own difficult situations, were selling falafel to raise funds to send back home. She befriended one of the group and later visited him at a building where a community of Syrians were living. “The next day I messaged him and asked how he was. After several hours came the reply: ‘Good morning, I am in Sweden’. He hadn’t mentioned anything the previous day. Some immigrants have no option but to travel illegally, so they don’t want anybody to know. They try to escape and sometimes they manage to do it.”

While the photographs Anna took of the immigrants were also those submitted to Magnum and subsequently exhibited at The Photography Show at Birmingham NEC in March this year, she had struggled to get Greek media to pay attention to her work. In contrast to the clamour to interview her when she was at CERN, the miserable circumstances of refugees were not a subject the Greek media wanted to present to their audience. Anna, growing somewhat cynical of the machinations of mass media, knew she needed to get under the skin of how media and communication works. She needed to box clever if she was to achieve her ultimate aim of using her photography to make a difference.
London seemed like an ideal destination, loaded as it is with media companies, communications agencies and third-sector organisations. And City had the perfect course to offer, a Masters degree in International Communication and Development. She successfully applied and started the course last autumn.

Anna realised while working at CERN that it is communications professionals, not photographers, who plan photographic assignments and make decisions about what gets published. Studying communication would allow her to work for a wider range of employers, from brands to charities and NGOs.

She is benefitting from a year studying at City, which has included being shortlisted in the Student Photographer of the Year category in The Guardian Student Media Awards 2014. “There are some very good professors at City,” she says. “I wish I had more time to enjoy their teaching. I particularly admire Dr Carolina Matos; she’s a very dynamic woman. She has taught me a lot about how media can make a positive difference in developing countries.”

Dr Matos, in return, is equally complimentary about her student: “Anna has showed herself to be intelligent, bright and capable. She has proved her capacity to engage well with a series of complex theories and debates.”

After completing a dissertation, Anna will leave City in September equipped with the necessary skills and know-how to build a career around her undoubted talent and an eye-catching cv. However, despite London’s status as a media hub, it’s likely that Anna’s immediate future will be overseas.

You have to be in the places where the problems are happening, so maybe I will relocate somewhere like the Middle East or go back to Greece. I can’t predict what will happen next; I just hope I will be doing something that helps people. And I will do photography, of course.”