Admission Price: This event is free to attend.
Light Refreshments will be available from 5.30pm. The talk will start at 6.00pm 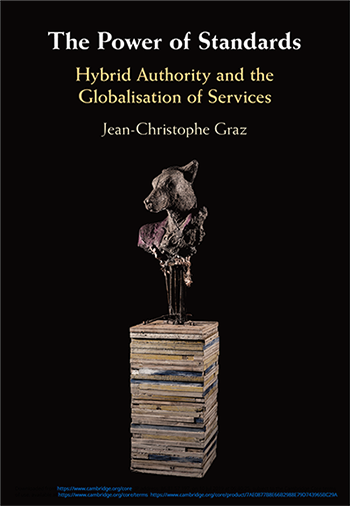 Author, Jean-Christophe Graz will debate his book “The Power of Standards: Hybrid Authority & the Globalization of Services“ with Sandy Hager and audience.

Standards often remain unseen, yet they play a fundamental part in the organisation of contemporary capitalism and society at large. What form of power do they epitomise? Why have they become so prominent? Are they set to be as important for the globalisation of services as for manufactured goods? Graz draws on international political economy and cognate fields to present strong theoretical arguments, compelling research and surprising evidence on the role of standards in the global expansion of services, with in-depth studies of their institutional environment and cases including the insurance industry and business process outsourcing in India. The power of standards resembles a form of transnational hybrid authority, in which ambiguity should be seen as a generic attribute, defining not only the status of public and private actors involved in standardisation and regulation, but also the scope of issues concerned and the space in which such authority is recognised when complying to standards.