Professor MacMillan will be speaking on the topic of ‘War and the Modern World’. The lecture will expand on the themes she covered in her widely acclaimed 2018 Reith Lectures - entitled The Mark of Cain - which explored the tangled history of war and society and our complicated feelings towards it and towards those who fight. 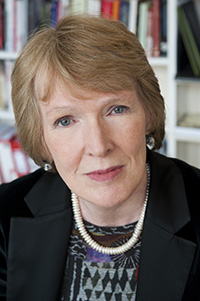 Margaret MacMillan is a Professor of History at the University of Toronto and emeritus Professor of International History and the former Warden of St. Antony's College at the University of Oxford. Her books include ‘Women of the Raj’ (1988, 2007); ‘Paris 1919: Six Months that Changed the World’ (2001) (‘Peacemakers’ in the UK) for which she was the first woman to win the Samuel Johnson Prize; ‘Nixon in China: Six Days that Changed the World’ (‘Seize the Hour: When Nixon Met Mao’ in the UK); ‘The Uses and Abuses of History’ (2008); ‘Extraordinary Canadians: Stephen Leacock’ (2009); ‘The War that Ended Peace’ (2014). Her most recent book is ‘History’s People’ (2015). She is a Fellow of the Royal Society of Literature and a Senior Fellow of Massey College, University of Toronto, Honorary Fellow of Trinity College, University of Toronto, Honorary Fellow of Lady Margaret Hall, St Hilda’s College and St Antony’s College at the University of Oxford. Margaret is also a Trustee of the Central European University in Budapest and the Imperial War Museum and sits on the editorial boards of International History and First World War Studies.