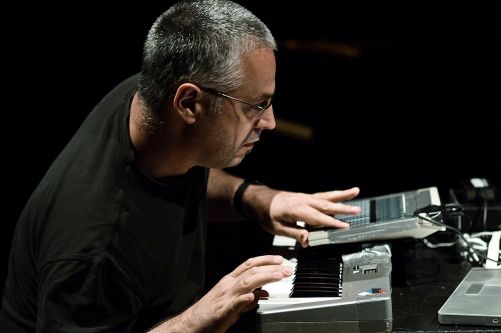 ELISION returns to City with the vivid, powerful music of British composer Richard Barrett, whose works have been inspired by, and tailored for the ensemble's fierce virtuosity since the early 1990s. Barrett and ELISION's close relationship has resulted in a major body of work, including large scale, extended cycles such as Opening of the Mouth (1992-97) and the two-hour long CONSTRUCTION (2003-11).

Their programme for City features emblematic works by Barrett for ELISION's soloists, culminating in a thirty-minute long new work for trombone and live electronics (diffused by the composer), membrane.

ELISION has been celebrated for its unique instrumentarium, close and longterm artistic relationships with composers, its virtuosity, and the ability and deep commitment of its musicians to renegotiate and re-invent performance practice and technique.

Notable ELISION achievements include the first-ever appearances of Australian contemporary opera at the Opéra National de Paris and the Fomenko Theatre in Moscow; the curation of a concert series at Kings Place London from 2009-12; and residencies at the Universities of Harvard, Stanford, Huddersfield, and Southwestern Texas.

ELISION has commissioned over 200 new works, including repertoire classics such as Liza Lim’s Mother Tongue, co-commissioned with the Ensemble Intercontemporain and Festival d’Automne à Paris.  ELISION has also joined with leading groups Ensemble Modern (Frankfurt), CIKADA (Oslo), Line Upon Line (Austin) and MusikFabrik (Köln) for large-scale projects. Conductors worked with include Jean Deroyer, Franck Ollu, Christian Eggen, Manuel Nawri, Simon Hewett, Denis Cohen, Carl Rosman, Pierre-André Valade and Eugene Ughetti. Of singular importance to ELISION was the relationship with Italian conductor Sandro Gorli, established in the early 1990’s, which led to him becoming a resident conductor for the ensemble for the better part of that decade.

The group’s discography extends to twenty-two compact discs including recordings made at the Deutschlandfunk, Radio Bremen and BBC Maida Vale Studios for release on HCR, KAIROS, NEOS, NMC and MODE, reviewed to acclaim in Gramophone, The Wire, New York Times, the Sunday Times and BBC Music Magazine.