This event is now fully booked; returns may be available on the door, shortly before the performance. 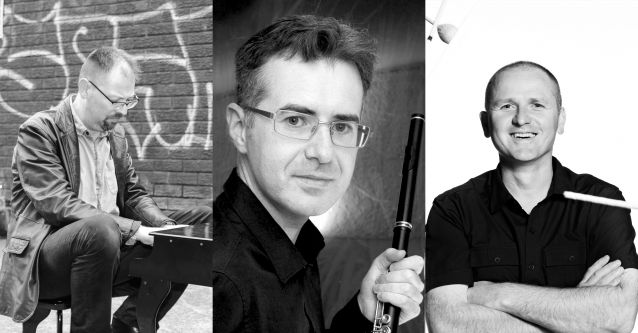 Richard Craig has performed with groups such as ELISION, Musikfabrik, Klangforum Wien, The Estonian Radio Choir, the RTÉ Orchestra and Das Experimentalstudio Ensemble, which has taken him to international festivals such as Maerzmusik Berlin, Wittener Tage für Neue Musik, the Venice Biennale, Huddersfield Contemporary Music Festival, the Festival D’Automne in Paris and the Lincoln Center Festival New York. Richard has also performed with Distractfold Ensemble, the winners of the 2014 Kranisteiner prize. His solo debut disc INWARD was released on the Métier label in 2011 to critical acclaim. VALE is his second solo disc with Métier, featuring works by Esaias Järnegard, Richard Barrett, John Croft, Brice Pauset, Evan Johnson and Fabrice Fitch. He is the Head of Performance at Bangor University, Wales.

Percussionist, composer and conductor Damien Harron is a co-founder of BackBeat Percussion Quartet with which he has received numerous awards including the Royal Overseas League Ensemble Prize (UK), the Concert Artists Guild Prize (USA) and the gold medal at the Osaka Chamber Music Festa (Japan).  These awards led to major international concert tours, including five tours of Japan and concerts in Merkin Hall and Weill Hall, New York, featuring many of Damien’s compositions. Damien is a member of the groups Decibel and Noszferatu appearing regularly as soloist with these groups. Damien has made recordings for Mode, NMC, NonClassical and Tzadik labels among others. He is curriculum leader for classical music at Leeds College of Music.

Philip Thomas specialises in performing experimental notated and improvised music as a soloist and with leading experimental music group Apartment House, winners of the 2012 Royal Philharmonic Society award for Chamber Music and Song. Recent solo projects have included premiere performances of works by Michael Finnissy, Howard Skempton and Christian Wolff; programmes of Canadian and British experimental music; a 12-hour performance of Cage’s Electronic Music for Piano; and a survey of Christian Wolff’s piano music. He has also performed recently with pianists Mark Knoop, Catherine Laws, Ian Pace and John Tilbury, and with the Merce Cunningham Dance Company. He is currently Professor of Performance at the University of Huddersfield, co-Director of CeReNeM, and co-editor of Changing the System: the Music of Christian Wolff (Ashgate Publishing, 2010).