A programme contrasting two forms of gamelan, the Indonesian tuned percussion orchestra. Gamelan is an important and long-standing part of the Department of Music at City, and the evening’s performers will be two of our resident ensembles: Lila Cita (led by Andy Channing), who will perform gamelan angklung, and Sekar Enggal (led by Simon Cook), who will perform gamelan degung.

For the Sundanese people of West Java, gamelan degung is an important expression of cultural identity, since it is quite different from gamelan found on the rest of the island of Java. While degung has relatively few instruments, the parts are very independent, resulting in rich textures. Sundanese gamelan is perhaps more obviously melodic than other types of gamelan. The programme will also include kacapi suling, Sundanese music for zithers and bamboo flute.

Gamelan angklung is one of the oldest types of Balinese gamelan, usually played for temple ceremonies and village festivals. Tuned bronze gongs and metallophones produce a dynamic music characterised by interlocking melodic and rhythmic patterns. In contrast to the larger Gong Kebyar, this gamelan is tuned to a four-note slendro scale and conjures a mood of playfulness and charm.

Sekar Enggal is a community gamelan group resident at City, and is the foremost ensemble performing Sundanese music in the UK. Simon Cook brought the first gamelan instruments to City in 1990.  He started playing gamelan in the Netherlands in 1979, and later lived in Indonesia for 12 years, in order to study the music.

Lila Cita was formed by Andy Channing in 1992 to play gamelan angklung, later expanding to encompass Gong Kebyar, Semar Pegulingan and other types of Balinese gamelan. Many of the members have studied in Bali, and it is the only group in Britain that regularly performs a wide range of traditional and contemporary Balinese music. The group has performed throughout the UK and abroad, including in Bali in 2006. www.facebook.com/lilacita 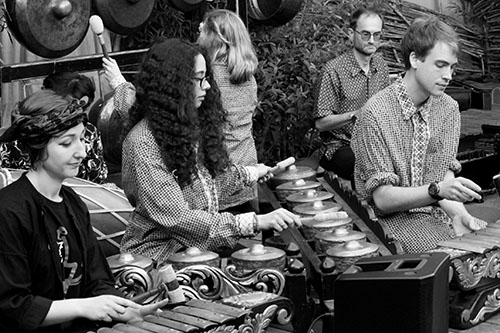