Following recent forays into performative and intermedial work, Plus Minus returns to its roots with a programme of instrumental music with electronics. Four of the most refined and distinctive voices in contemporary music will be featured: Cassandra Miller, Davíð Brynjar Franzson, and City composers Newton Armstrong and Georgia Rodgers. Each of these composers is concerned, albeit in different ways, with the fundaments of the compositional act and the manner in which sonic materials can be contextualised, processed, layered and transcribed.

Plus Minus aims to present an evening of music that is strikingly contemporary without recourse to outside references, current technologies or multimedia. it is a focussed program that seeks to sonically take stock of where we are in new music today by stripping back the layers so that only the sound remains. 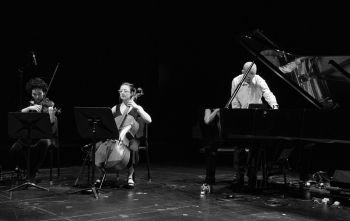 Plus-Minus Ensemble is a London based collective committed to commissioning new work and placing it alongside recent and landmark modern repertoire. Formed in 2003 by Joanna Bailie and Matthew Shlomowitz, Plus-Minus is distinguished by its interest in performative, electroacoustic and conceptual pieces, and experimental open works such as Stockhausen‘s 1963 classic, from which the group takes its name.

Plus-Minus has regularly performed in London at Kammer Klang (Cafe Oto) and City, University of London; has been broadcast on BBC Radio 3 and Deutschlandradio Kultur; and has performed at the Borealis Festival Bergen, Cut and Splice, the Sampler Series at l'Auditori in Barcelona, Klang Festival Copenhagen, Fundación BBVA Bilbao, Huddersfield Contemporary Music Festival, MaerzMusik, the Spor Festival in Aarhus, Transit Festival Leuven and Ultima Festival Oslo.

Plus-Minus has also worked with student composers at Bath Spa, City, Durham, Huddersfield and Southampton universities, and performs a concert of masters student work at the Guildhall School of Music each June. In addition to performing works by Bailie and Shlomowitz, Plus Minus has recently worked with composers such as Peter Ablinger, Laurence Crane, Bernhard Lang, Cassandra Miller, James Saunders, Alexander Schubert and Jennifer Walshe.