This event is now full. Bookings have been closed. 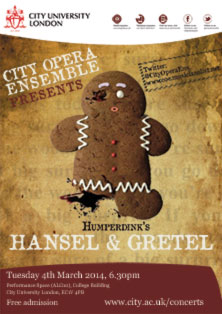 The  City  Opera  Ensemble  returns  this year with  a  performance  of  Engelbert  Humperdinck's opera Hansel and Gretel.

This  classic  opera  sets  music  to  the  well-known  Grimm  fairy  tale,  which  traces  the  adventure  of Hansel and Gretel. When the two children are abandoned by their mother to a nearby forest, they encounter  a  prodigious  Gingerbread  house  standing  in  a  clearing  in  the  midst  of the woods. As they begin to inspect its candy-covered walls and break off one of its irresistible looking sweets, an adventure full of dark magic and impending doom commences.