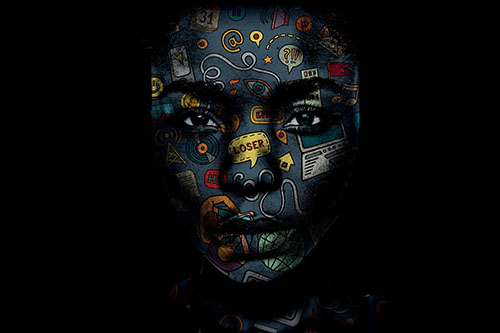 Four youths surround a fifth, mocking, taunting and shoving. Is this prototypical ‘schoolyard’ bullying? Is it the precursor to severe blows that attempt to enforce a vague set of territorial lines? Is this a deeply asymmetrical fight brewing, prompted by the scuffing of trainers or an unwanted look that one young man simply felt lasted too long? Making sense of contemporary youth violence in the UK is difficult. Popular narratives about ‘gangs’ abound, but for the most part young people navigate a world of violence that is not so easily labelled and where situations are often grey and confusing.

Violence has physical, emotional/affective and symbolic dimensions. Perpetrators are most often victims themselves. Poverty, abuse, marginalisation, racism, sexism, harassment, homo- and transphobia inflict a slow violence that can wound deeper and more severely than a kick. Violence ‘in real life’ is increasingly entangled with online communication and social media.

In a 21st century that evades the certainties and clarity of categorisation of earlier eras, making sense of youth violence requires clear concepts and thorough research. Who is best to handle particular acts of violence: schools, communities and families, or is it the police and courts, or youth and social services? Answering this requires careful analysis and very much depends on the specifics.

City Criminologists recognise that the voices of young people are too often unheard, but that their own insights are often the best resource to make sense of their world and challenges. Understanding contemporary youth violence necessitates listening: hearing about what exactly is going on; learning about what young people think and feel. In this way, not only can increasingly relevant theories be generated but effective ways of responding to challenges can be identified.