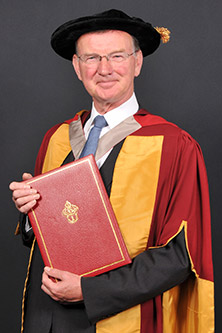 Terry Hill, CBE, was given an Award of Doctor of Science honoris causa by City in 2011.

Prior to his current role, Dr Hill was Arup Group Chairman (2004-2009), responsible for the overall strategic direction of the firm, then Chairman - Global Transport Market (2009-2011), focusing on developing the aviation, maritime, rail and highways businesses and ensuring the delivery of the best transport projects to clients throughout the world.