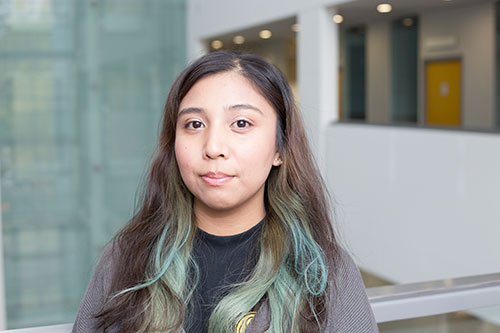 Jasmine is a final year BSc Business Computing Systems student. She is from South East London and loves to explore the city.

The Human-Computer Interaction module not only opened my eyes to another avenue of Computing but made me realise my strengths in web development.

What is the name of the company you are currently working for and your job title?

Describe your new job role and the main responsibilities you have undertaken so far?

I’ve actually just moved into this role! It’s more of a leadership role and problem solving with system discrepancies. My team do a lot of liaising to leadership and laterally amongst the whole Genius Bar. It is a much more system-facing than customer facing role than previously, but ultimately customer interaction is the foundation of the role and Apple, itself.

Why did you decide to study at City, University of London?

I love the city vibe and grew up in London, so what better way to spend my student years than in the heart of the city I adore.

What was the favourite aspect of your course?

Definitely the opportunities offered by my school, SMCSE. I’ve never been so overwhelmed (in the most positive way) with the volume and range of opportunities thrown at me, it really was a case of going after what I wanted which really took a load off my mind in regards to experience hunting throughout the years.

What was the highlight of your time at City so far?

Since starting at City, I’ve worked as a Widening Participation student ambassador, raising awareness and aspirations of the young people of today. My four years as an ambassador helped me greatly both in my professional and personal development; I also had a blast with the team, who I know I could easily rely on going forward into my professional future.

What has been your favourite module and why?

Human-Computer Interaction! It was a second year module which not only opened my eyes to another avenue of Computing but made me realise my strengths in web development and how much I enjoy making others happy, whether that be creating a website that helps them at the bare minimum or offering a service which teaches them much more than they were expecting in capabilities.

What is the main benefit of studying a course at City?

I already mentioned how development opportunities are in abundance at City but by being able to live and study in the heart of London - with the financial district one direction and Tech City the other, there are countless opportunities that you will end up finding yourself that the university will aid you in, if needed.

How did City prepare you for the professional world?

Working together was often encouraged, whether that was structured into a module or through the study spaces around campus. Doing an industrial placement year was probably the biggest factor that City contributed towards my professional preparation, as not only was the application stage fully facilitated but the placement was also countable towards my final grade which helped ease the stress in final year. I wouldn’t have been able to experience the real-world effects of my degree had I not done a placement year - I’m very grateful!!

How did City help you to get the job?

A lot of the examples I used during my interviews were based around what I experienced at City. My experiences not only showed how I had developed professionally but as a person too. I’ve noticed such focus is becoming more prevalent during interviews nowadays - how are you to actually work with as opposed to your skills and abilities to do the job. So to summarise, you really have to take what you can from City, be a yes man! I’m sure any experience will help somewhere in your future.