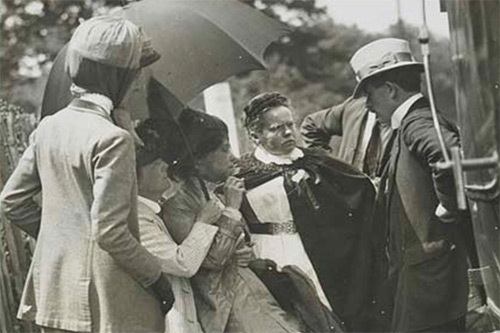 Catherine Pine was a nurse who cared for suffragette hunger strikers after their release from Holloway prison.

Catherine Pine was born in Maidstone, Kent in 1864. She undertook training to become a nurse at St Bartholomew’s School of Nursing between 1895 and 1897; this School joined City, University of London in 1995. Catherine remained at St Bartholomew’s Hospital until 1907. In 1908 with a fellow member of the Women’s Social and Political Union (WSPU), Gertrude Townend, Catherine ran a nursing home in London that was used by suffragettes recovering from imprisonment and hunger strikes in Holloway Prison, which continued after the passing of the ‘Cat and Mouse Act’ in 1913. This nursing home came under increasing scrutiny by police and the press and Catherine Pine was forced to nurse her patients at different addresses in London.

The Museum of London hold Catherine’s collection of books and photographs about the fight for women’s suffrage in the Nurse Pine Collection. Catherine left her suffragette medal to the history section of the British College of Nursing.

In February 1913 Emmeline Pankhurst was sentenced to three years' penal servitude for inciting persons to place an explosive in a building at Walton, Surrey. In prison she immediately went on hunger strike and over the following five months she was repeatedly released and rearrested under the terms of the ‘Cat and Mouse’ Act (1913). The photograph above shows Emmeline being rearrested. Catherine Pine can be seen protecting her patient and confronting the police during the arrest.

Reproduced with kind permission from the Museum of London.