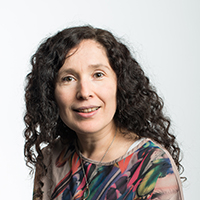 Dr Castro Alvaredo studied at the faculty of Physics of the University of Santiago de Compostela (Spain) from 1993 to 1997. At the end of this period she graduated with Honours in Physics specializing in Particle Physics and obtaining the highest grade of her year. Immediately afterwards she joined the Particle Physics department of the same university with a 4 year research fellowship from the Spanish Ministry of Education. From 1997 to 1999 she carried out her Diploma Thesis under the supervision of Prof. J. Luis Miramontes. Thereafter she started working in her PhD which she carried out to a large extent as a visitor at the Freie Universität Berlin (Germany) working under the supervision of Prof. A. Fring. She obtained her PhD in July 2001.

After her graduation she obtained a 3 year research fellowship at the Freie Universität Berlin (Germany) where she pursued her scientific collaboration with Prof. A. Fring. At the end of this period she was awarded a research fellowship at the Ecole Normale Supérieure de Lyon (France) where she spent the 14 months prior to her appointment as a Lecturer at City University London, in March 2005.

Dr Castro Alvaredo's research interests lie in quantum integrable field theories and quantum integrable spin chains. Some of the topics in the area of quantum field theory she has worked on are: the development of the bootstrap program for integrable quantum field theories with and without boundaries and defects. She has carried out much of her work in this area in collaboration with Prof. A. Fring, with occasional collaborations with Mr J. Dreißig, Dr C. Figueira de Morisson Faria, Dr C. Korff and Dr F. Göhmann.

Dr Castro-Alvaredo has also worked on the computation of form factors of quantum spin chains in collaboration with Prof. Jean-Michel Maillet.

Since 2007 Dr Castro Alvaredo has been working on the computation of the bi-partite entanglement entropy in integrable quantum field theories. This quantity provides a measure of the amount of entanglement that may be stored in a quantum state. The investigation of the properties of the entanglement entropy has attracted much attention in recent years as it has applications in many areas, from black holes, to quantum computing. Dr Castro-Alvaredo has made several important contributions to this area since 2007, starting with her work with Prof. J. L. Cardy and Dr B. Doyon where the so-called branch point twist field approach to entanglement measures in gapped quanum systems was initiated. This work has been followed by many publications looking at the entanglement content of quasi-particle excitations, in the presence of boundaries ,and in out-of-equilibrium situations, among other topics.

Since 2014 Dr Castro Alvaredo has also made several contributions to the growing field of out-of-equilibrium dynamics in one-dimensional many body quantum systems. Notably, a work published in 2016 in collaboration with B. Doyon and T. Yoshimura has led to the development of a new area of research within the field employing the so-called Generalized Hydrodynamics approach to out-of-equilibrium phenomena.

Dr Castro Alvaredo has been Admissions Tutor and Programme Director for Mathematics at the Department of Mathematics of City, University of London.

Summary of my Research

I am a theoretical physicist working in Quantum Field Theory (QFT). I specialize on the study of integrable 1+1-dimensional QFTs and other related theories, such as conformal field theories and integrable quantum spin chains.
Integrable models posses extra symmetries (that is, a large or infinite number of conserved quantities). This leads to very strong constraints on the form and value of all their physical quantities. Integrability combined with the restriction to one space dimension allows for the formulation of theories whose scattering amplitudes, form factors and correlation functions may be computed exactly. The systematic computation of these quantities is referred to as the "Bootstrap Programme" and it has attracted a great deal of attention over the last four decades.

Much of the work that I have carried out relates to the development of such a programme, that is, computing scattering matrices, form factors and correlation functions in a variety of models and investigating their analytical properties and mathematical structures. Most of my work in these areas has been carried out in collaboration with Prof. Andreas Fring. In the context of quantum spin chains I have performed form factor calculations for mixed systems in collaboration with Prof. Jean-Michel Maillet.

Since 2007 I have been applying some of the techniques above to the development of a systematic approach to the computation of the entanglement entropy associated to a the ground state of integrable QFTs and quantum spin chains. This work has been carried out initially in collaboration with Dr Benjamin Doyon and Prof. John Cardy and continues to be pursued in collaboration with Dr Doyon and my PhD students Dr Emanuele Levi and Mr Davide Bianchini.

My most recent interest has been the extension of some of the integrability techniques mentioned earlier to the study of integrable quantum field theories out of equilibrium. This has lead to a recent paper in collaboration with Dr B. Doyon, Ms M. Hoogeveen and Mr Y. Chen.

Since joining City I have supervised final year projects on many topics, including: