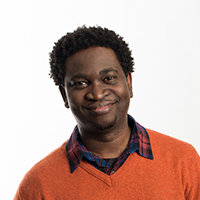 Kizito is passionate about applications of probability theory, Bayesian statistics, geometry and machine-learning techniques, when trying to simulate, assess and forecast the (failure) behaviour of software-based systems. His doctoral thesis clarifies and significantly extends the applicability of a family of probabilistic models used to describe the failure behaviour of multi-version software. He also developed a novel geometric approach to extremising the expected system reliability of a class of fault-tolerant software-based systems; so-called 1-out-of-N systems. Currently, he is particularly interested in the assessment/forecasting challenges that arise when these systems rely on evolving machine-learning solutions.

Since joining CSR, Kizito has contributed to several projects (e.g. DISPO, DIRC, IRRIIS, PIA-FARA, AFTER, DIDERO-PC, DISIEM) both as a mathematician and as a software developer.

He is experienced in building simulations of complex systems using C++, and was instrumental in developing the PIA-FARA simulation engine -- creating modular software that implements and analyses the probabilistic, functional and process relationships that may exist between the components of large-scale interdependent complex critical infrastructure.