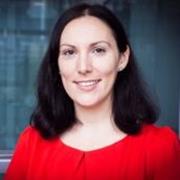 Katie is a Speech and Language Therapist specialising in acquired language disorders who joined City University in 2014. She previously worked in acute hospital settings in Ireland and more recently in the NHS.

Katie initially studied at Trinity College Dublin where her degree was in Clinical Speech and Language Studies. After working at Cork University Hospital and Midlands Regional Hospital Mullingar in Ireland, she moved briefly to Dorset working on the acute stroke ward at Dorset County Hospital and then on to Newcastle-Upon-Tyne where she covered the neuro-rehabilitation and neuro-behavioural wards in Walkergate Park. She has always worked with adults with acquired language disorders. Her interest in rehabilitation and evidence base for therapies has lead her to her current post as a research assistant at City University where she is working on the CommuniCATE project headed by Celia Woolf and Jane Marshall. She is also completing an MSc in Advanced Practice in Speech, Language and Communication at City.

Katie takes students from the PG and BSc Speech and Language Courses at City on placement at the Compass Centre which is the on-site clinic.

Katie is currently a team member on the CommuniCATE project. This is a large scale research project on the use of technology in the rehabilitation of acquired reading, writing and spoken language disorders in stroke patients.