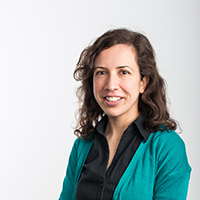 Dr Joana Fonseca graduated in Civil Engineering from the IST -Technical University of Lisbon, Portugal. Following four years of working in industry, she went to Imperial College London to resume her academic studies, obtaining an MSc in Soil Mechanics. After working at AECOM for one year, Joana returned to Imperial College to undertake her doctoral research on the micromechanics of granular media, in particular the quantification of fabric evolution of a natural sand under shearing. She subsequently became a Research Associate at Imperial College's Department of Materials investigating the micro structural response of a semi-solid carbon steel; before moving to the Laboratoire 3SR in Grenoble, France, where she researched the grain-scale mechanisms that lead to failure in sandstones. In April 2013, Joana was appointed Lecturer in Geotechnical Engineering at City University.

Microstructure evolution during CPTU in silt

Soil fabric and morphology of sands

This pioneering study presented a statistical distribution of fabric directional data for specimens of sand at different stages of shearing deformation. It made use of x-ray tomography and image processing techniques to quantify the internal structure using (i) directional parameters as particle, contact normal, branch vector and void orientations, (ii) scalar parameters and Coordination Number and Contact Index and (iii) the operational grading of the soil and the 3D shape of the constituent grains.

Mechanisms of inelastic deformation in sandstones

This study provides new insight in the failure of cohesive geomaterials by exploring micro-structure in a “fourth dimension” - time or, in other words, deformation. Laboratory techniques were successfully developed to allow in-situ scans of the full specimen to be carried out. This investigation has revealed striking patterns of microscale deformation in sandstones with different degrees of cementation.

This study exploited the synergies between metal casting and soil mechanics. The micro-structural response of a semi-solid carbon steel to loading was quantified by analysis of time-resolved synchrotron radiographs. The evidence provided of the austenite grains rearranging as quasi-rigid bodies, transmitting shear and compressive forces across grain-grain contacts and causing shear-induced dilation, supports the hypothesis that the behaviour of a semi-solid steel can be interpreted using a granular mechanics approach.