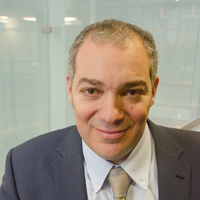 Professor Jean K. Chalaby obtained his first degree from the Université de Lausanne, Switzerland. Following a PhD in Sociology at the LSE in 1994 he became a post-doctoral fellow of the Swiss National Science Foundation, joining City University London as a lecturer in 2000.

His early career research focused on historical and comparative sociology, publishing notably The Invention of Journalism (Macmillan, 1998) and The de Gaulle Presidency and the Media: Statism and Public Communications (2002, Palgrave Macmillan).

Professor Chalaby has published in excess of 70 single-authored publications, many of which in the leading academic journals of his field. He regularly delivers papers abroad and is frequently invited as guest speaker at seminars and colloquia across Europe. He was a visiting lecturer at the University of Geneva for 15 years, and was Head of Department, Sociology, between 2012 and 2014.