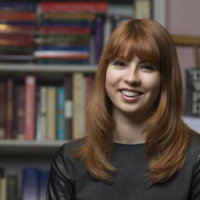 As well as a Lecturer in Medieval and Early Modern Literature at City, University of London, I am a BBC/AHRC New Generation Thinker. I regularly present and contribute to broadcasts on BBC Radio 3 and 4, as well as publications such as Times Literary Supplement and BBC History Extra. My first book, 'Transformative Waters in Medieval Literature' is due for publication with Boydell and Brewer in 2021.

After studying for my BA and MPhil at the University of Cambridge, I joined Queen Mary in 2012 to begin my doctoral thesis. The project was supervised by Professor Julia Boffey and examined the role of water as a literary metaphor in late-medieval devotional prose, with a special emphasis on writings for and by women. After a one-year lectureship at Queen Mary I moved to City in September 2017.

I have published on a range of topics, including tropes of crying and cleansing in Aelred of Rievaulx’s spiritual treatise 'A Rule of Life for a Recluse', the relationship between fluids and emotions in medieval lyrics, and the role of the senses in fourteenth-century alliterative verse.

I am an Associate Fellow of the Higher Education Academy and I teach on a number of different modules on the BA and MA at City, including two research-led modules on women's writing throughout history.

PhD supervision: I welcome applications from prospective postgraduate students interested in late-medieval devotional literature, particularly writing by and for women; the history of the emotions; fluidity and transformation; modern preoccupations with the medieval world.

- Women's literary culture in the Middle Ages
- Environment as metaphor in late-medieval literature
- Modern preoccupations with the medieval
- History of the Emotions
- The medical humanities, especially sex difference in the Middle Ages

- 'Transformative Waters in Medieval Literature', due for publication with Boydell and Brewer in 2021
- ‘‘Make me a good woman’: reflections on becoming in a fifteenth-century prayer sequence’ (article in progress)
- ‘A hunt for the Nun of Watton in Late-Medieval Translations of 'De Institutione Inclusarum’ (article in progress)