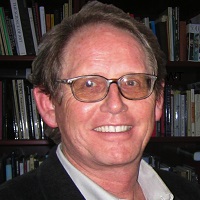 Professor Tyler is a visual neuroscientist specializing in visual and oculomotor function and disorders who joined City University of London in 2013. He previously worked at several universities in the United States and has been a long-established researcher at the Smith-Kettlewell Eye Research Institute, San Francisco, where he established its Brain Imaging Center. He maintains active collaborations with research groups in France, Germany, United States, Taiwan, Israel and Australia.

Christopher Tyler received his training in Experimental Psychology at the Universities of Leicester, Aston and Keele before taking postdoctoral fellowships at Northeastern University, Boston, University of Bristol and Bell Laboratories. He then took up a position at the Smith-Kettlewell Eye Research Institute, where he retains an affiliation, and has taught courses at Northeastern, UCLA, UC Santa Barbara, UC Berkeley and the University of Paris along the way. He has given numerous keynote addresses to scientific meetings across a range of disciplines, from traumatic brain injury to stereopsis and color vision to Renaissance art and cartography.

Christopher Tyler's scientific interests are in the processes of visual perception and visual neuroscience. He has contributed to the study of the brain processing of many aspects of visual processing, including form, symmetry, flicker, motion, color, and particularly stereoscopic depth perception. He has developed effective psychophysical and electrophysiological tests for the diagnosis of retinal, optic nerve, visual cortical and oculomotor disorders. He has also studied photoreceptor dynamics, and neural processing in other species such as butterflies and fish. His current work is focused on the effects of traumatic brain damage on eye movements and their brainstem control mechanisms.

CDMRP (US) "Human Oculomotor Functions & Their Deficits in Traumatic Brain Injury." The goal is to develop a basic suite of oculomotor measures, including fMRI of the brainstem nuclei involved, for the assessment of oculomotor deficits in the veterans with TBI relative to a normative sample.

AFOSR (US) "Encoding of 3D Structure in the Visual Scene: A New Conceptualization." The goal of this multidisciplinary proposal is to integrate fMRI, neurophysiology and modeling toward a mathematical conceptualization of the encoding of 3D structure from multiple surface cues.

NSF (US) "Short-, Medium- and Long-Term Neural Dynamics of Conceptual Learning." The goal of this project is to apply a novel temporal analysis to determining the time course of neural activation in cortical regions involved in the cognitive processes of learning.