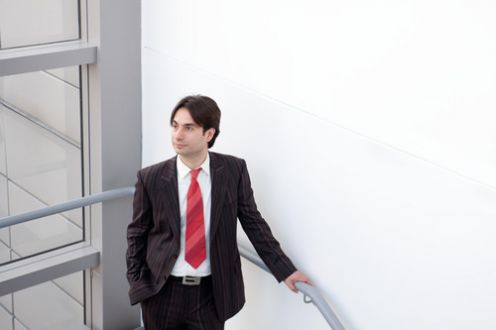 For many of the world's current political and business leaders, entrepreneurship and technology offer two of the most promising paths out of a troubling economic climate. The work of Professor Souitaris of the Sir John Cass Business School could scarcely be more relevant: his research into how technology entrepreneurs emerge and how their companies grow has been attracting interest since he joined City University London in 2004.

Professor Souitaris' research interests extend from the very earliest stages of technology entrepreneurship through to the stages when, in his words, a technology company is capable of 'conquering the world'. He is particularly interested in what determines the successful funding and growth of academic 'spin-offs': companies that originate and are incubated within universities. His research into academic enterprise is closely related to his work on student entrepreneurship. A recent study that explored the effect of entrepreneurship programmes on science and engineering students indicated that students who had the opportunity to study entrepreneurship felt more inspired than those who had not and showed increased intentions to start their own companies. This work is highly cited by both academics and policy commentators, which is a testament to its relevance.

Venture capital funds provide high-potential start-up companies with financial capital in return for equity and offer one of the principal routes for technology entrepreneurs to grow their companies. Within this broad field, Professor Souitaris' work focuses on corporate venture capital funds, which emerge within large companies and invest in start-ups with the goal of securing strategic and financial returns for the parent company. In a forthcoming article in Academy of Management, written with Cass Business School colleague Dr Stefania Zerbinati, he studies six such organisations through the lens of institutional theory. In particular, he examines whether the funds take on the characteristics of their parent company's culture or whether instead they seek to imitate the often very different institutional norms of the venture capital world.

Much of Professor Souitaris' research has important implications for business practice. He has used his expertise on nascent entrepreneurship, for example, to advise small technology start-ups within universities. But it has been his research into the working practices of management teams in successful technology companies that has attracted the most attention from practitioners, leading to an invitation to publish his findings in the Harvard Business Review of October 2011. Through a questionnaire and interview-based study of almost 200 new technology ventures listed on the London Stock Exchange, Professor Souitaris examined the relationship between executive approaches to multi-tasking and company financial performance. Though conventional wisdom advises entrepreneurs that multitasking and interruptions hinder productivity, Professor Souitaris' research suggests that polychronicity (a culture of working on multiple tasks at a time) within an executive team is correlated with better financial performance. Multitasking executives secure access to more insightful information, which leads to faster strategic decisions, ideally suited to the rapidly changing world of technology entrepreneurship.