The music that was lost for 500 years

Professor Alexander Lingas and his world-renowned Cappella Romana choir are known for their masterful interpretations of medieval Byzantine chant. But their recent collaboration with two Stanford University professors – while rooted in the past – took them on a journey that was positively modern

Cappella Romana, the professional vocal ensemble led by Professor Alexander Lingas, are famous for their performances of early and contemporary sacred classical music in the Christian traditions of East and West.

Professor Lingas, a Reader in City, University of London’s Department of Music, formed the choir in 1991. They have gone on to become particularly celebrated for their presentations and recordings of medieval Byzantine chant (the Eastern sibling of Gregorian chant), Greek and Russian Orthodox choral works, and other sacred and historic Christian music.

But for a choir that devotes so much of its output to celebrating the ancient and the traditional – a recent hi-tech partnership with Stanford University has brought Cappella Romana hurtling into the modern era.

And yet – conversely – the story starts with a cathedral built in AD 537. 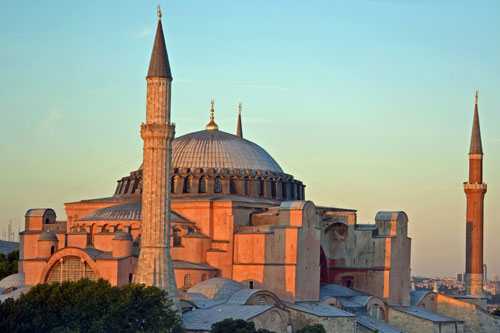 The majestic resonance of Hagia Sophia

As a venue for the performance of Christian music, Hagia Sophia’s reputation is legendary. For starters, it is incredibly reverberant – sounds inside will echo and remain audible for 11 seconds – huge by modern standards.

Songs were written specially for the building and its architecture was a big influence on Eastern Orthodox church music.

In Professor Pentcheva’s words: “When you speak or chant in that space, your breath is extended and attenuated by surfaces of marble and gold.”

But with Christianity not practised here in five hundred years, nobody has heard this music as it was intended to sound ever since. 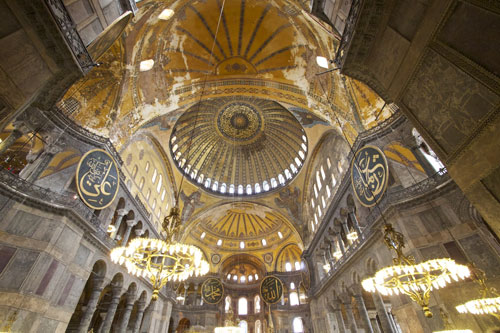 After extensive research and numerous trips to Istanbul, Professors Pentcheva and Abel were able to map the acoustic profile of Hagia Sophia and create a digital filter that could be applied to any sound.

Their next move was to approach Professor Lingas’s Cappella Romana and a collaboration called Icons of Sound was born.

Applying the professors’ filter to the voices of the choir was to instantly create a sound that precisely replicates how the music would have sounded centuries ago during Hagia Sophia’s time as a cathedral.

The end result was a performance at Stanford’s Bing Concert Hall [see video and audio links above], and subsequently an album – Lost Voices of Hagia Sophia: Medieval Byzantine Chant – the first vocal album in the world to be recorded entirely in live virtual acoustics.

Professor Lingas said: “This album brings together art history, music history, performance, and technology to recreate medieval sacred sound in the cathedral of Hagia Sophia as an aural virtual reality.”

All of the music for the recording had itself not been heard for centuries and was newly edited from medieval manuscripts by Professor Lingas as well as former City Music student and now Research Fellow, Dr Spyridon Antonopoulos.

"So, Cappella Romana not only provided the performances for this project, but also much of its musicological and liturgical scholarship," said Professor Lingas.

But this very modern rendering of medieval music still had one interesting twist to run.

Pop-Up Magazine is an innovative ‘live magazine’ in the US, created for a stage, a screen, and a live audience. The shows feature never-before seen or heard multimedia stories performed on stage by writers, radio producers, photographers, filmmakers and musicians. The events are not live-streamed or recorded for later viewing; it’s all about absorbing everything in the moment, knowing that there will not be a video, podcast or any chance to listen or watch again.

One of Pop-Up’s journalists, Sam Harnett, who co-hosts The World According To Sound podcast, put together a feature about Stanford and City’s Hagia Sophia collaboration and Cappella Romana were invited to participate at three Pop-Up shows before a total audience of 7,000 people across at theatres in Oakland, Brooklyn, and Washington DC. 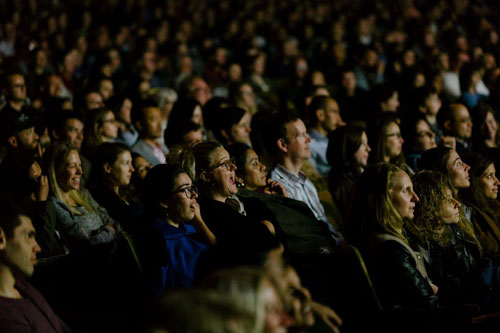 Using the professors’ filter in real time, on a stage swirling with atmospheric dust particles and golden light, the effect was a transportive and transcendent experience for an audience who got to hear what Byzantine chants would have sounded like in Hagia Romana during medieval times.

Ruthie Fierberg, a writer for US theatrical magazine Playbill, was covering one of the shows. “Writing about this now,” she said, “cannot capture what happened in that room – the story. The awe.”

Read the Icons of Sound paper: 'Icons of Sound: Auralizing the Lost Voice of Hagia Sophia', published in the medieval studies journal, Speculum.

Founded in 1991, and based in Portland, Oregon, Cappella Romana’s name refers to the medieval Greek concept of the Roman oikoumene (inhabited world), which embraced Rome and Western Europe, as well as the Byzantine Empire of Constantinople (‘New Rome’) and its Slavic commonwealth.

Cappella Romana’s mission is to combine passion with scholarship in its exploration of the musical traditions of the Christian East and West, with emphasis on early and contemporary music. The choir aim to “bring to life music that meets a deep human need, not only to belong and to have a shared creative experience, but to feel the full range of ethical, emotional, and spiritual effect as expressed through music”. They strive to give an experience that allows their audience to feel “a sheer joy that cannot be contained by mere words, but through the ineffable sounds of the human voice in song”.

For more information about Capella Romana, visit their website.