The cultural theorist Professor Sara Ahmed, in a study of diversity and racism in institutional life, wrote about the “politics of stranger making; how some … become understood as the rightful occupants of certain spaces … while others are treated as ‘space invaders’, as invading the space reserved for others”.

Organised with the Royal Musical Association and MusicHE and with involvement from various other partner organisations, the event programme offered some questions for consideration ahead of a day of discussion:

The conference continued a discussion that was started at a May 2019 workshop at City, titled ‘Interrogating Equality, Diversity and Inclusion in Music: BAME routes into and through Higher Education’.

Recognising that EDI is an important issue facing music education today, and that Music HE has an important role to play in shaping the broader agenda, organisers invited colleagues from a range of Music HE institutions to share knowledge and experiences from within their own departments. 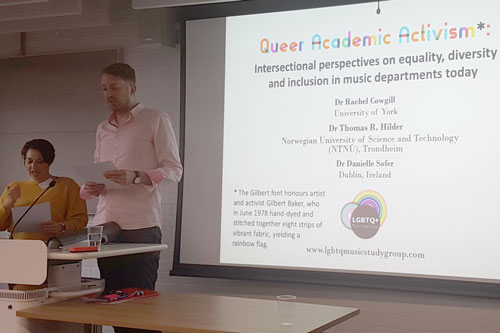 Colleagues from a range of Music HE institutions shared their experiences

Approximately 70 individuals from across the UK were in attendance, including university music departments and conservatoires, with the aim of developing a broad subject awareness of the best practice in Music HE nationally and to provide a forum for exploring ideas and proposals for future work.

The day included a provocation session to stimulate debate, a range of case studies, and opportunity to network.

Head of City’s Department of Music and co-organiser of the event, Professor Laudan Nooshin, said: “We are really delighted to have hosted this event on one of the most important issues facing Music Higher Education today.

“The level of interest in the event and the range of speakers demonstrates the commitment of music departments and conservatoires across the country to find ways of bringing about change in relation to the diversity of our staff and student body and our curricula.” – Professor Laudan Nooshin

As Vice-President of the Royal Musical Association, Professor Nooshin is co-leading a national Working Group on EDI in Music HE, with representatives from a range of music organisations.

A working group has also been established in the Music Department at City to look at these issues.

Among the speakers at the event was City, University of London Department of Music alumna Genevieve Arkle, now a doctoral student at the University of Surrey.

As a BAME academic, she hopes to be able to use her voice to increase awareness to issues of diversity in the field of musicology. Her talk (and accompanying paper) was entitled ‘I don’t see race’: A spotlight on the voices of BAME academics and performers in classical music and musicology. 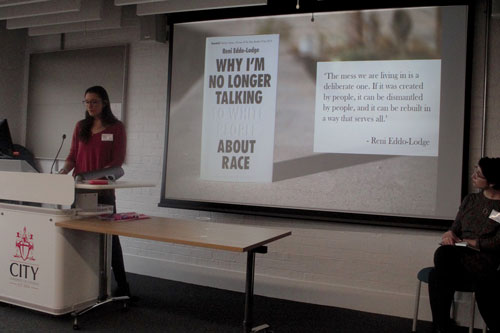 Arkle’s paper focused on the experiences and issues of BAME representation in classical music, considering experiences of those working as performers in the industry, as well as academics and researchers establishing careers in the field of historical musicology.

Arkle made reference [see image above] to author Reni Eddo-Lodge’s bestselling and prize-winning book Why I’m No Longer Talking to White People About Race, specifically the quote: “The mess we are living in is a deliberate one. If it was created by people, it can be dismantled by people, and it can be rebuilt in a way that serves all.”

Other speakers included: Eleanor Ryan, MPhil Candidate from University of Cambridge [pictured below]; Kevin Komisaruk, Associate Professor in the University of Toronto’s Faculty of Music; and the Royal College of Music’s Dr Maiko Kawabata. 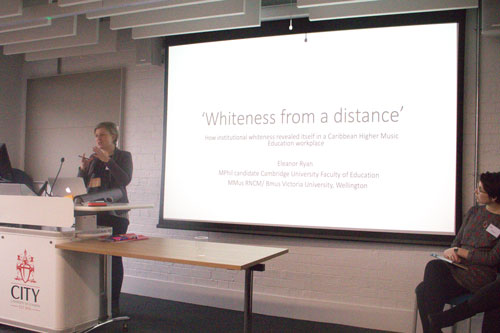 Reflections on the conference

One attendee at the event – Abigail Bruce, a master’s degree student from Kingston University – neatly summarised the day’s discussion.

She said: “Within the conference environment, surrounded by stakeholders in both music and EDI, many with personal investments, a safe space was created.

“As such, speakers and delegates celebrated the tenacity of individuals – both historic and present – for unapologetically embracing every aspect of their authentic selves.

“However, in so doing, this was a stark reminder of the disparate circumstances which still make ‘safe-spaces’ necessary.

“Pertinently therefore, by placing an emphatic spotlight on difference, even with the best intentions, can EDI agendas risk exaggerating divides?

“Significantly, it is possible that in attempting to remove certain barriers, we may be creating new ones, as one delegate highlighted.

“Indeed, activism might involve stepping out of our normative spaces, to recognise the overlooked, rather than just the under-represented. This will allow us to better consider who is actually being included under the label of ‘inclusive practice’.