New research from City, University of London has found that President Trump’s Mexico-related tweets have an influence on currency market volatility.

The research examines President Trump’s Twitter activity between 1st January 2015 and 2nd February 2018. This covers activity before his campaign to become President, during the campaign, and during his first year of office. In just those three years he tweeted about 14,500 times, with 438 of those tweets referring to Mexico sent over 239 distinct days.

During this same period, the USD/MXN exchange rate faced substantial volatility, with the most notable spike just after the November 2016 US Presidential election, where the Mexican currency suffered a sudden 13% drop in value relative to the US dollar, although its fall quickly moderated to a 9% loss.

Dr Benton notes that there was considerable volatility in the Mexican currency market during the years analysed, much of which seemed to be caused by President Trump’s tweets.

For example, shortly before taking office in January 2017, a series of tweets by President Trump criticising car manufacturers for building cars in Mexico to be sold in the US sent the peso tumbling against the US dollar.

The 3rd January tweet “General Motors is sending Mexican made model of Chevy Cruze to U.S. car dealers-tax free across border. Make in U.S.A. or pay big border tax!” may have resulted in a 3.5% devaluation of the peso against the US dollar.

Mexico’s central bank intervened in response but another tweet just two days later on 5th January “Toyota Motor said will build a new plant in Baja, Mexico, to build Corolla cars for U.S. NO WAY! Build plant in U.S. or pay big border tax” led to another 1.5% loss in value against the dollar.

Dr Benton’s paper explains why President Trump’s tweets mattered so much to investors’ forecasts for the Mexican peso.

The study also analyses the impact of the tone of language use by President Trump in the tweets, as well as the number of retweets and favourites they amassed.

Stronger tones mattered to the Mexican peso-US dollar exchange rate. Rising volatility in the peso can be attributed to ’negative’ tweets like that on 24th February 2015:

“The Mexican Legal system is corrupt, as is much of Mexico. Pay me the money that is owed me now – and stop sending criminals over our border” – @realDonaldTrump

But it can also be attributed to ’positive’ tweets as well. Although positive in tone, a tweet sent on 6th June 2015 “Just made the point at #NCGOPcon that "we have to protect our border & I think everyone here knows, nobody can build a wall like Trump!"” would have rattled financial markets for its negative implications for the Mexican economy. 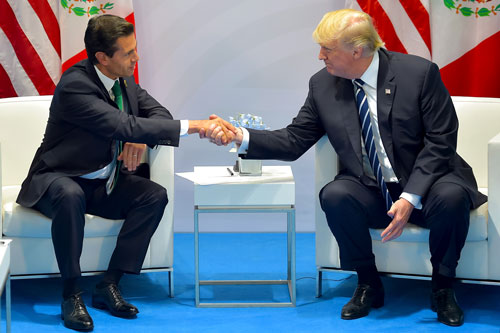 US President Donald Trump shakes hands with then President of Mexico, Enrique Peña Nieto, in 2017

Dr Benton findings suggest that investors use social media to monitor unfiltered policy information direct from government officials that can help them make decisions to protect their assets.

Dr Benton said: “Not only do social media posts allow investors to determine the likely future policy direction of government, they allow investors to gather information on the benchmark against which politicians seek to be evaluated and thus on politicians’ level of resolve to implement their policy goals.”

“Traditional media headlines thus might not contain much political news. Although scholars have begun to examine how social media posts by important financial market players affect market dynamics, they have not yet examined how posts by political players might also matter to investors. Our research shows this is the case.”

Before joining City, Dr Benton was a member of the Department of Political Studies at the Center for Research and Teaching in Economics (CIDE) in Mexico City. She has also been a Visiting Professor in the Department of Political Science at the University of São Paulo, Brazil and a Visiting Scholar in the Institute of Latin American Studies at the German Institute of Global and Area Studies in Hamburg, Germany.

More about Dr Benton and her research can be found on her website.