Social media echo chambers may reflect real-life conversations that are linked to the geographic locations of users, according to new research.

The findings contradict the assumption that echo chambers – discussions which only involve people with the same views – are the result of online interactions alone.

Conducted by City, University of London and published in the journal PLOS ONE, the study analysed 33,889 Twitter posts from the Brexit referendum campaign period.

The average distance between users who sent pro-leave messages was 22km (around 14 miles) and the average for remain supporters was 40km (around 25 miles).

Lead researcher Dr Marco Bastos said: “Our study suggests that online echo chambers may be the result of conversations that spill over from in-person interactions.

“It calls into question the assumption that echo chambers are a kind of disease created by social media, and instead suggests that people are bringing their pub conversations to online debate.” 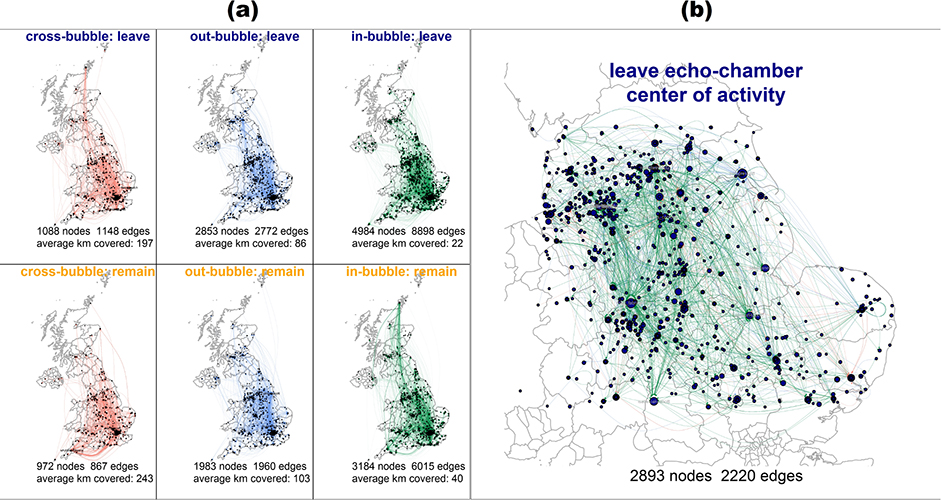 The study analysed posts by 15,299 Twitter users on the subject of the Brexit referendum during the official ten-week campaign period, between 15th April and 23rd June 2016.

Just 9 per cent of tweets by leave supporters were sent to remain supporters, who similarly only sent 10 per cent of messages to pro-leave users.

The findings add more weight to the idea that there were significant social media echo chambers during the build-up to the UK’s EU referendum.

According to the study, remain-supporting users were more likely to speak to other remain supporters outside of their own geographic areas, whereas leave supporters were more restricted to interaction with users from nearby areas.

Researcher Dr Dan Mercea said: “The differences between echo chambers involving leave and remain supporters can be explained by the distinct geographical clustering of their social networks where communication online represents part of their existing social relations.”

As shown in maps created by the researchers to show the locations of echo chambers, users who tweeted pro-leave messages were clustered around areas that voted strongly in favour of Brexit, including the Midlands, north and east of England.

Researcher Dr Andrea Baronchelli said: "Our study sheds light on the so-far largely unexplored connection between the online and offline dimensions of our society.

“We expect more intricate relationships between physical ties and online interactions to be at play and I anticipate our results will spark more research in this direction.

"For example, future studies should investigate whether participation in online echo chambers is motivated by talking to people offline who also share their political views or whether the directionality works the other way around.”

Read the full paper, The geographic embedding of online echo chambers: Evidence from the Brexit campaign