Researchers from The Crabb Lab at City, University of London and UCL Institute of Ophthalmology have developed virtual reality software which can simulate sight loss. 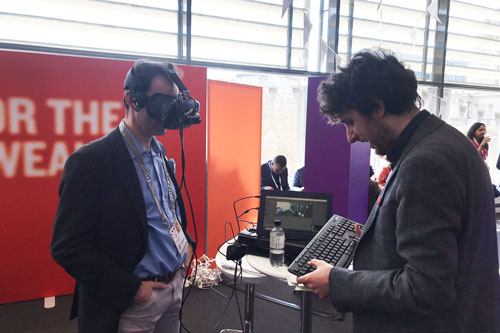 Demonstrated at the Vision for the Commonwealth stand at the Commonwealth Heads of Government Meeting Forums on Tuesday 17 and Wednesday 18 April, the cutting-edge VR-based experiences allows anyone to experience the world with eye disease, improving awareness, understanding and services for people with visual impairment.

Sharing the platform with Peek Vision, a social enterprise which works to bring better vision and health to everyone, at the event Peek demonstrated a smartphone-based vision check app called Peek Acuity. It has been engineered by eye experts and allows anyone to check visual acuity using only an Android smartphone or tablet.

Combined, the two advanced and portable approaches could help not only raise awareness of eye disease, but also deliver eye tests to people who need them. The stand was supported by Clearly, who are working to make sure that everyone can get a pair of glasses when they need them, no matter who they are or where they live.

Worldwide over 253 million people have a visual impairment. The direct care costs alone are estimated to be $632 billion per year, and the loss of productivity and quality-of-life are incalculable. Over 80% of these impairments could have been prevented or cured.

Most unclear eyesight is caused by refractive error, caused by irregular shaped eyeballs or damage to the eye’s lens. It can usually be treated with glasses. However, most blinding eye diseases - such as glaucoma, age-related macular degeneration and diabetic retinopathy - are caused by damage to the specialised cells inside the eye (the retina).  They can often be slowed or prevented with simple drugs, but once the damage is done, it is often irreversible.

For both refractive error and eye disease, the route to diagnosis is often the same. Diseases of the retina are often picked up only when people go to get their eyes checked for glasses. As a result, it is critically important that everybody has access to regular sight checks, and are encouraged to get their eyesight tested regularly, even if they aren’t aware of any difficulties, and even if they don’t think they ‘need glasses’.

Dr Pete Jones, a researcher from the Crabb Lab at City, University of London and the UCL Institute of Ophthalmology, said:

“The early effects of eye-disease can be subtle, gradual, and often don’t stop you from doing many everyday tasks they often go undiagnosed. We developed our virtual reality software to allow individuals without sight loss to experience sight loss in an immersive, interactive and intuitive way.

“Ultimately, we all have the shared aim of bringing better vision to everybody who needs it. And hope that in combination with Clearly and Peek Vision, we can raise awareness of eye diseases with our VR software, while also making sure that everyone can get a pair of glasses when they need them.”