Leading figures from the UK’s major broadcasters have joined MPs in praise of City, University of London research that investigates gender imbalance in the news.

Senior editors from the BBC, ITV, Channel 4, Sky and Channel 5 were among those to discuss the issue at City’s third Women on Air conference, where the latest research findings were announced.

Led by Professor Lis Howell, the City research primarily looks at the ratio of male to female experts used on the six flagship news programmes in the UK. The study found the average ratio has gradually improved from 4:1 in 2014 to 2.2:1 in 2018. 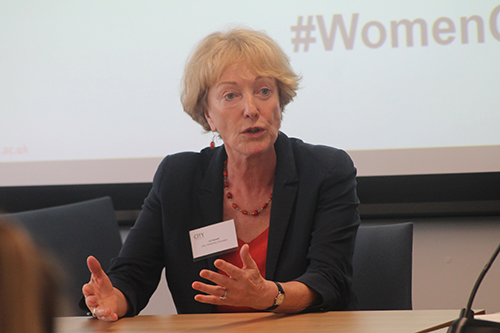 Paul Royall, editor of BBC News at Ten, said he would continue to take steps to increase the proportion of women used as experts after the City survey showed his programme had made progress but was still behind its rivals.

Reacting to the figures, Paul said: “I’m frustrated, disappointed and a little bit surprised actually that we’ve gone a little bit backwards and I’m going to have to work harder to make sure that doesn’t happen again.”

He explained his programme was now collecting its own figures and revealed that in May 2018 more than 50 per cent of its contributors were female.

“The good thing about today is we just need to go further, do more and this is a really, really timely reminder,” he added.

Survey a ‘scary process’ for editors

Ben de Pear, editor of Channel 4 News, told the conference he reacted each year to Professor Howell’s survey and was in favour of her research into the issue over Ofcom regulation.

“On the question of authority, I think you are the authority,” he said. “Every year when your figures come out, I’m told, ‘Lis Howell’s figures are coming out soon’.”

He added: “I think the authority that you bring to it – to hold us all to account – it is a scary process… When you first started it, there was a massive spurt of shock, the figures were so bad.” 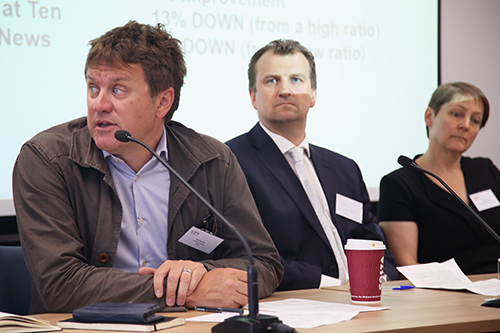 Julie Hulme, director of newsgathering at ITV News, said she was determined to keep improving the figures for her programme because of the wider impact that can be achieved by improving gender equality in the media.

“This is where we can be agents of change in society,” she said. “It’s a really big piece of work that we’re doing, actually, to help women in society have their voice heard and I think we’re a really important part of that.”

Sky News editor of output, Jane Threlfall, said her team was also putting measures in place to address the issue and wanted to keep improving.

“We haven’t cracked it, so there’s a real energy to keep pushing forward and a there’s a real keenness within the newsroom to challenge what was the norm," said. "And I think our numbers are going up and they will continue to go up.” 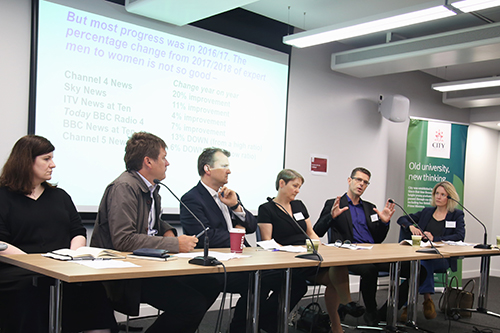 Cait FitzSimons, editor of 5 News, which is consistently the best performer with on-screen gender balance out of the broadcasters surveyed, said the attitude of her team was an important factor.

“I think newsroom culture is absolutely key to this,” she said. “Everybody in the newsroom understands that our programmes should reflect our audience.”

Ollie Stone-Lee, deputy editor of the Today programme on BBC Radio 4, said his show had been successful in addressing imbalance and he noted how Professor Howell’s study had begun with informal monitoring of Today in 2011.

“We’ve been through a journey but actually I think there’s a long way still to go,” he said.

A ‘huge priority’ for the BBC

In a keynote speech, Fran Unsworth, the director of news and current affairs at the BBC, explained the corporation was taking various measures to improve its representation of different sections of its audience.

She said: “At the BBC, we know that if we don’t take significant steps to improve representation, we will be seen as irrelevant to many sections of the society we’re trying to serve, so having the right mix of talent and voices on air is a huge priority for us.

“I note the survey done by City university on the appearances of women on the main TV and radio bulletins and programmes. These are programmes which still reach millions of people across the UK every day.” 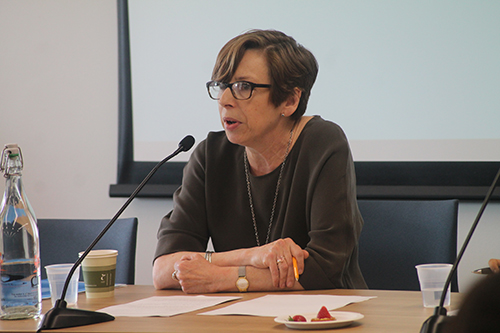 Among the BBC initiatives is its 50:50 project, which is an internal monitoring scheme that allows BBC programmes to see how many female contributors they are using on a daily basis.

Ros Atkins, the presenter of Outside Source and the creator of 50:50, told the Women on Air conference about how he launched the project in 2016.

“At the heart of the system I came up with was data,” he said. “It struck me that while in lots of areas of corporate life data is everywhere, actually the BBC had a very limited amount of data on women’s representation in its journalism.

“Some of it came from Lis. There was some internally, but we really didn’t have a lot of numbers.” 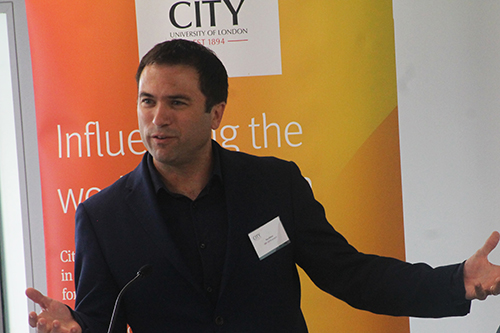 Margot James, Minister for Digital and the Creative Industries, was among one of three MPs to attend the conference.

She told the event that supporting women across the whole workforce was “a top priority for the government” and the media was an important element in this.

She said: “Increasing our representation in the media is especially critical because you collectively, the ones who work in the media, really do have the power to have a big influence on the changes in society.”

In reference to Professor Howell’s research, she said: “I think things have changed for the better, and I applaud the role of this organisation in the influence you’ve had on these changes.” 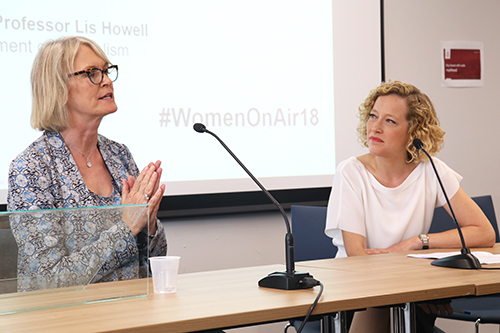 Conservative MP Nicky Morgan, chair of the Treasury Select Committee and the former Minister for Women and Equalities, said she did not think regulation should be introduced to ensure gender balance in the media.

However, she argued government-commissioned reports on the number of women on FTSE 100 boards helped to put pressure on company to change their practices.

“I think the publication and transparency of figures like today is so important,” she said. “Congratulations to Lis for publishing the figures, and keep going… I heard one of the panellists there saying, ‘Oh God, I think it’s Lis’s figures coming out’ – that’s great.” 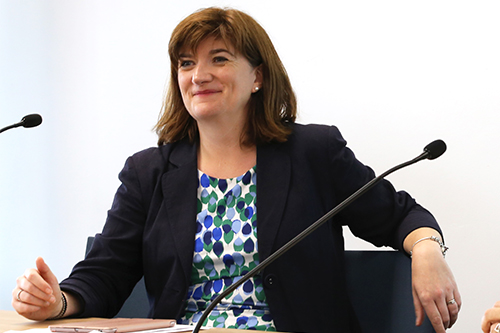 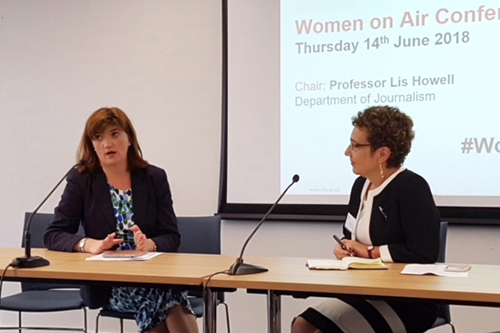 Labour MP Emily Thornberry, who is shadow foreign secretary and MP for south Islington, compared the representation of women in Parliament with that in the media.

“It’s this kind of event that I think City in Islington is rightly known for, and I’m very proud to be your MP,” she said. 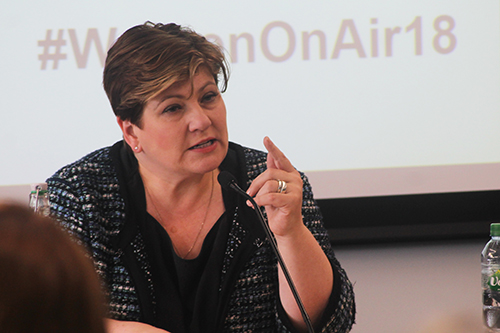 As part of a panel discussing the broader issue of diversity in the media, the influence of data and research was also highlighted by Ade Rawcliffe, head of diversity at ITV.

Discussing the City survey, Ofcom reports, figures released by Directors UK and the Diamond diversity monitoring project, Ade said: “You can never underestimate the power of data – like you’ve seen before, about Ben de Pear thinking, ‘Oh no, Lis’s figures are coming out.”

She added: “I think any data that can give a benchmark year on year, and benchmark against other broadcasters, you shouldn’t underestimate the power of that, and that’s really, really helpful.” 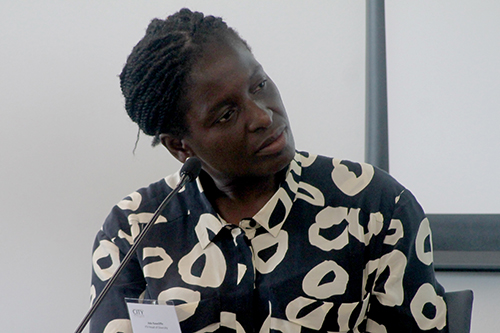 The Diamond project, which is run by the Creative Diversity Network in partnership with the five main UK broadcasters, has been tracking diversity in broadcast media though an online monitoring system. It was launched in 2016.

Deborah Williams, of the Creative Diversity Network, said 26,000 contributors who work for the broadcasters had submitted their data to Diamond in its first 18 months and the first report had shown a near equal gender split.

She said: “Diamond was business-critical and I think it got to a point where actually people were looking at the industry and going, ‘You’re not fit for purpose’… That’s where self-regulation becomes really important.”

Also on the panel was Vikki Cook, Ofcom’s director of standards and audience protection, who said tackling diversity concerns in the media was a gradual process.

“I think there’s a frustration that no-one has fixed the problem yet and I don’t think you can with diversity,” she said. “A bit like your report Lis, you have to keep shining a spotlight on the same issues over and over and over again.” 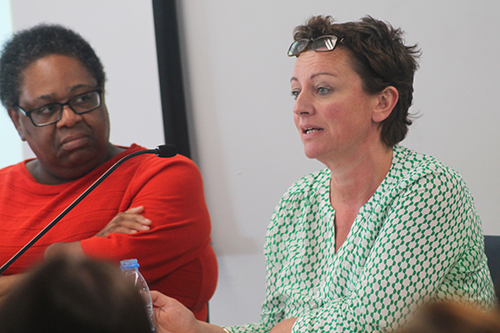 The number of women who are directors for the major broadcasters is published in reports from Directors UK. Its chief executive Andrew Chowns told the conference the current level was 24 per cent and believed regulator-enforced quotas were needed.

Referring to his organisation’s upcoming report, he said: “It’s not going to make good reading.” 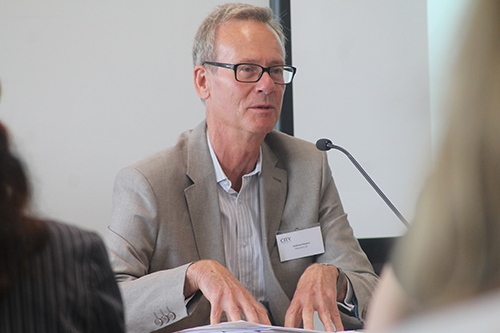 Making a difference to the sector

As part of the full-day Women on Air conference, City invited several journalism alumnae back to discuss their experiences in the media.

Minnie Stephenson, reporter for 5 News, Kathryn Stanczyszyn, reporter and presenter at the BBC, and Cordelia Lynch, US correspondent for Sky News, were joined by Penny Marshall, social affairs editor at ITV News, and Katherine Nash, a presenter on 5 News.

“You’ve made such a difference to the sector and I’m really proud to be associated in a very small way with the work you’ve done with this university,” she said. “You’re an absolutely terrific force and a real positive force for change.” 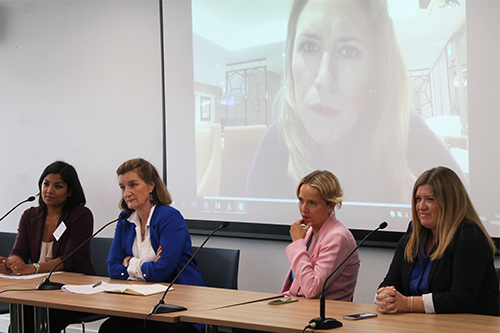 The panellists reported that there was good diversity in the field, with Caelainn explaining that she led an all-female data journalism team. 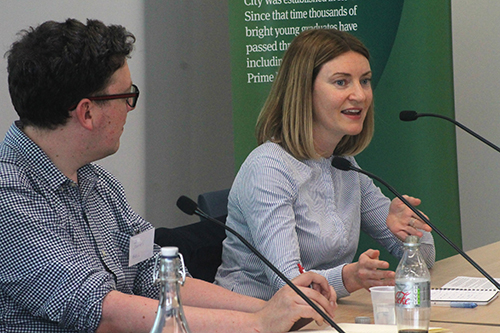 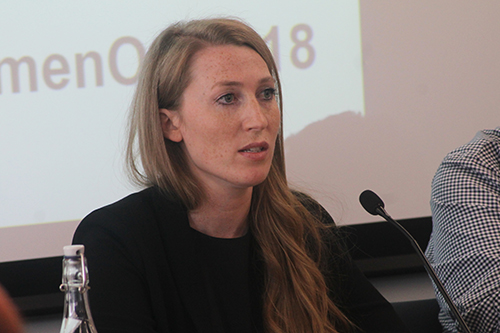 The Women on Air conference also included interviews with some of the key speakers by Cathy Newman, a presenter on Channel 4 News, BBC Midlands correspondent Sima Kotecha, head of the Department of Journalism at City Professor Suzanne Franks and Jane Martinson, Marjorie Deane Professor of Financial Journalism at the university. The event was hosted and organised by Professor Lis Howell.