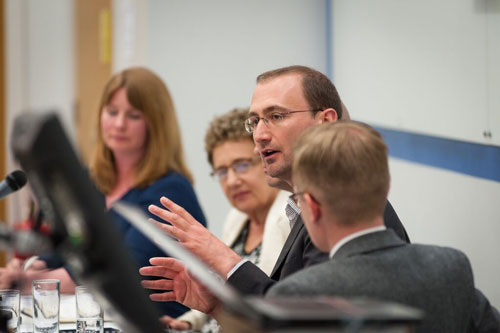 The findings of a major new survey of UK journalists have been announced at City University London.

Dr Neil Thurman, of City and Ludwig-Maximilians-Universität München, led the research project into the views of journalists in the digital age.

Among the subjects explored by the researchers were pay, ethics, the diversity of the profession, journalists’ roles in society, journalism practices and who they trust.

The survey was carried out for the Reuters Institute for the Study of Journalism, at the University of Oxford, and its findings were published in the report Journalists in the UK.

After presenting the results, Dr Thurman was joined for a panel discussion by Pete Clifton, Editor-in-Chief of the Press Association, Michelle Stanistreet, General Secretary of the National Union of Journalists, Rasmus Kleis Nielsen of the Reuters Institute and Professor Suzanne Franks of City.

Dr Thurman said: “This report shows the increasing pressures that journalists face due to the social, economic, and technological changes affecting journalism. However, the survey suggests despite this and the fall-out the Leveson Report, UK journalists are still more aggressive than US media in their pursuit of important stories.”

Here are ten of the key findings:

1) Post-Leveson, UK journalists still more likely to push boundaries to get the story 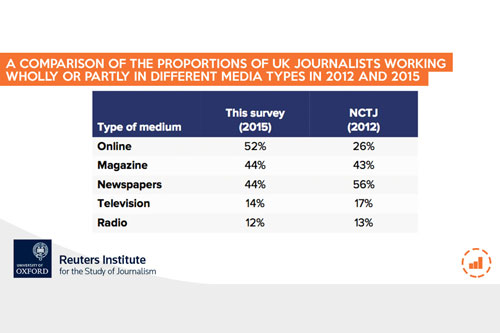 2) Over half of the journalists surveyed now work online

Since 2012, the proportion of journalists in the UK working in print versions of newspapers has fallen from 56% to 44%, while the proportion working online has risen from 26% to 52%. However, the median pay of those working exclusively online is lower than that of journalists who continue to do all their work for printed newspapers. (p.57)

The report argues this could be because of the increasing influence of audiences and public relations communications. 41% of journalists surveyed for the report said data and research on what audiences like to read is now ‘very’ or ‘extremely’ influential; 61% thought the influence of public relations had increased over the last five years. (p.36)

The roles mentioned most frequently show that journalists see themselves as providers of accurate information, analysis, entertainment and scrutinisers of those in power. A minority of those surveyed said setting the political agenda, being an adversary of government, or supporting national development were important roles to fill as a journalist. (p.13)

About half of journalists said they were left of centre; the other half were split between the centre and the right-wing. Right-of-centre political beliefs increase with seniority. (p.12)

This is a higher proportion than found in a survey of US journalists six years ago, which the report says may be partly explained by the increased financial pressures on journalism.77% of journalists said they felt their job was more influenced by profit-making pressures than it had been five years ago, with 66% saying the same about advertising. (p.37)

8) Journalists have little trust in religious leaders and trade unions

76% of journalists think religion has little or no influence on their work and 61% are not members of a formal faith, a lower percentage than in the general population. They trust religious leaders and trade unions less than Parliament, the police, and the military, although politicians and political parties are at the bottom of their list. (p.48) 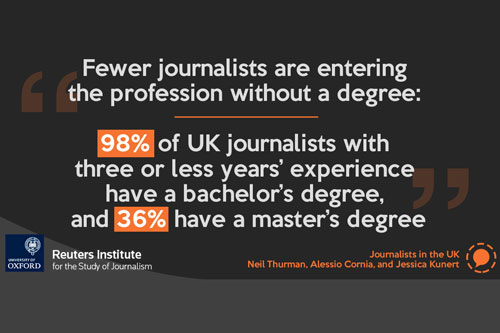 64% of those who entered the profession in the last five years had a degree in journalism or a related field, compared with 51% of journalists in the previous five-year period. Only 41% of all working journalists have degrees related to journalism. (p.10)

The survey shows how young journalists, despite having higher formal qualifications, are relatively poorly paid. About 20% of journalists have gross yearly earnings of less than £19,200, so are on incomes that are either close to or under the ‘living wage’. (p.16)

The report is based on a comprehensive survey using a representative sample of 700 journalists. It was carried out between 7th December and 31st December 2015

The authors of Journalists in the UK are: Dr Neil Thurman; Dr Alessio Cornia, a Research Fellow at the Reuters Institute for the Study of Journalism; and Dr Jessica Kunert, postdoctoral researcher at Ludwig-Maximilians-Universität München.