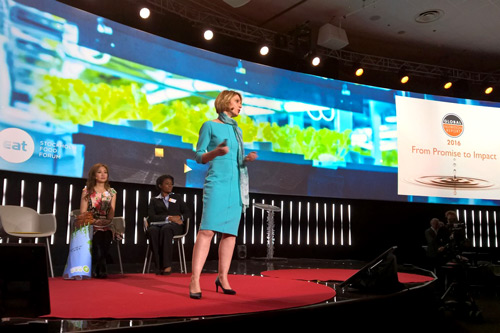 Rates of obesity and overweight are rising in every region of the world and in nearly every country according to the 2016 Global Nutrition Report.

The independent report, which is Co-Chaired by Professor Corinna Hawkes (right) of the Centre for Food Policy at City University London, reveals there has been insufficient progress in the fight against all forms of malnutrition.

Forty Four per cent of countries with data available (57 out of 129 countries) now experience very serious levels of undernutrition as well as adult overweight and obesity, and despite good progress in some countries, the world is off track to reduce and reverse this trend.

The Global Nutrition Report is an annual assessment of countries’ progress in meeting global nutrition targets established by the World Health Assembly.

Professor Hawkes said: “We’re far from done addressing undernutrition, but governments and donors now also have to cope with the threat that nutrition-related non-communicable diseases and obesity pose to improving global health and development. One in 12 people globally have diabetes now, and nearly two billion people are obese or overweight. We must stem the tide.”

The report shows that malnutrition is responsible for nearly half of all deaths of children under age 5 and, together with poor diets, is the number one driver of the global burden of disease. At least 57 countries experience serious levels of both undernutrition – including stunting and anemia – and adult overweight and obesity, putting a massive strain on many already fragile health systems.

Malnutrition manifests itself in many different ways: as poor child growth and development; as individuals who are skin and bone or prone to infection; as those who carry too much weight or whose blood contains too much sugar, salt, fat or cholesterol; or those who are deficient in important vitamins or minerals.

Lawrence Haddad, Co-Chair of the Global Nutrition Report and Senior Research Fellow at the International Food Policy Research Institute, said: “One in three people suffer from some form of malnutrition. We now live in a world where being malnourished is the new normal. It is a world that we must all claim as totally unacceptable.”

The 2016 report was launched in seven cities around the globe – Beijing, Johannesburg, Nairobi, New Delhi, New York, Stockholm and Washington D.C. – and comes on the heels of renewed international attention on nutrition.

The report highlights the staggering economic costs of malnutrition, as well as the critical gaps in investments and commitments to date, including:

Despite these challenges, the report shows that progress has been made, and is possible. The number of stunted children under 5 is declining in every region except Africa and Oceania.

Individually, many countries have shown remarkable progress: in Ghana for example, stunting rates have almost halved – from 36 to 19 percent– in just 11 years. Many countries are also close to being on track to meet global targets; Peru and Malawi, for example, are close to being on track to meeting global targets on breastfeeding and anemia reduction.

Lawrence Haddad said: “The key ingredient to all of these success stories is political commitment. Where leaders in government, civil society, academia and business are committed – and willing to be held accountable – anything is possible. Despite the challenges, malnutrition is not inevitable—ultimately it is a political choice: one which we need leaders across the world to make.”

While some countries are beginning to increase their budget allocations to nutrition, the gap remains significant. Analysis included in the report shows a USD 70 billion gap globally to meet 2025 milestones for stunting, severe acute malnutrition, breastfeeding and anemia.

While closing the gap remains a key priority, analysis in the report on the relationship between nutrition and related sectors also presents opportunities to improve nutrition by examining existing programs. For example, the report shows that improvements in areas like agriculture, health, education, social protection and sanitation could help address a large percentage of the stunting burden.

Emorn Udomkesmalee, Co-Chair of the report, said: “More than 30 percent of government spending in Africa and Asia is already allocated to agriculture, education, social protection, health and water, sanitation and hygiene. If we can make adjustments in those sectors, we could have an outsize impact on the malnutrition burden in these regions.”

The report also highlights critical implementation gaps on policies and interventions which have been proven to reduce malnutrition:

The Global Nutrition Report assesses countries’ progress in meeting commitments made at the Nutrition for Growth Summit in 2013. Some of the agreed upon targets aim to:

Professor Hawkes became Director of the Centre for Food Policy, in the Department of Sociology, in April 2016.